Complete any tasks The Joker gives him (succeeded)
To aid his boss in saving Harley Quinn (indirectly succeeded, but at the cost of his own life).

Jonny Frost is a minor antagonist in the 2016 DC Warner Bros. film Suicide Squad. He is a henchman of the Joker and the third-in-command of his gang.

He was portrayed by Jim Parrack.

Frost is a henchman of the Joker. After Harley Quinn has been arrested by Batman, Joker sends out Frost to investigate her whereabouts. When Frost returns to Joker, revealing that Quinn is held at Belle Reve prison in Louisiana, Joker orders him to 'bring the car around'.

Together with Joker, Frost follows Harley Quinn and the Task Force X to Midway City where they hijack the helicopter supposed to retreive Amanda Waller. When the Squad and Waller head towards a roof waiting for their helicopter, Frost and Joker instead open fire, Frost using the helicopter's minigun. They force the squad to search for cover and allow Harley to jump off the roof and grab the rope hanging from the helicopter. They then fly off in their attempt to escape the city. However, the helicopter was shut down by a missile during their escape and crashed against a building. It's completely unknown what happened to Frost, as the Joker survived the explosion like Harley, possibly implying that Frost could also have survived the crash, but he most likely was killed when the helicopter crashed, as he didn't accompany his boss when he rescued Harley from Belle Reve. 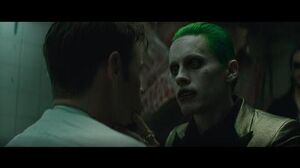 Retrieved from "https://villains.fandom.com/wiki/Jonny_Frost?oldid=3689066"
Community content is available under CC-BY-SA unless otherwise noted.