Jorji Costava is an antagonist from the 2013 indie puzzle video game Papers, Please. He is a drug smuggler who tries to bribe and charm his way past the inspector and border control to get into Arstotzka.

Jorji first appears on Day 3 with no passport or documents, claiming that he does not need them to enter. After being interrogated, Jorji leaves and tells the inspector that he will return with a passport.

On Day 4, Jorji will return with an obviously fake passport, crudely drawn on a piece of paper and from a false country ("Cobrastan") and issuing city ("Bestburg"). When the inspector calls Jorji out on it, Jorji will deny it being a fake. When the passport is denied, he will leave and say he will get a better one.

On Day 6, Jorji will again return, this time with a real and clear passport. However, he will be lacking an entry permit that is required by foreigners. The inspector will tell him this, but Jorji will just laugh it off, thinking it is a joke. When denied, Jorji will leave, but will commend the inspector for doing his job so well.

On Day 8, he will have a passport and an entry ticket, but this is after tickets are no longer accepted and permits are required. The inspector will tell him this, making Jorji upset that he spent money on a ticket. Even when the inspector instructs him not to return, Jorji insists he will return with the right documents.

On Day 11, Jorji will arrive, and will have all of the correct documents with no errors or discrepancies. When the passport is approved, Jorji will be ecstatic and thank the inspector, giving him an Obristan token as a symbol of his gratitude. If the player choses to deny him anyway, Jorji will finally snap and get angry, leaving forever and resulting in the inspector receiving a citation for denying an applicant cleared for entry.

However, on Day 19, Jorji will again return to the border trying to get in. His documents will be in order, but his weight will be different. He blames his wife's cooking on it, but after being searched, is revealed that he has drugs hidden in his clothing. Jorji admits that he has a "side business" of selling drugs in Arstotzka, and offers the inspector ten credits to let him through. If the inspector denies or detains Jorji, he will commend him for keeping drugs off of the streets. If cleared, he will pay the inspector and the inspector will receive a citation for admitting a smuggler.

On Day 22, Jorji will again return smuggling drugs, and offers the same bribe to be let in with his contraband. Again the player can choose to deny/detain him or let him pass; denying/detaining him will result in Jorji again commending the inspector's actions, but admitting that, while the inspector is a stand-up guy, it is bad for his business. If approved, Jorji will pay the inspector and the inspector will receive a citation.

On Day 24, Jorji's face officially appears on a wanted list. When questioned about this, Jorji becomes upset as he apparently bribed the police not to put his face on the wanted list. If denied or detained, Jorji will claim that the police know him pretty well, and that he will work something out. If approved, Jorji will thank the inspector for helping him and enter, and the inspector will receive a citation.

Later, Arstotzka begins to oppress its people, and ends up taking away the passports of the inspector and his family so they cannot leave. On Day 29, Jorji asks the inspector about all that is going on. When the inspector tells him that his passport has been confiscated, Jorji gives him the information for a man who can forge false passports for him and/or his family, allowing him to potentially escape. Regardless if he is approved or denied, Jorji will give his passport to the inspector, telling him to use it and that he will get a new one.

Finally, on Day 31, Jorji returns for a final time and says he made a "big score" and wants to thank the inspector. He gives the inspector forty credits, tells the inspector he is considering retirement, and leaves.

Jorji makes a cameo appearance in the 2018 short film based on the game. He is among the various people going through the border, where he tries to use his forged "Cobrastan" passport, but is promptly escorted out of the booth by the guards.

Jorji is very affable, polite, and charismatic despite his criminal lifestyle. He acknowledges that what he does is wrong and commends people who try and stop him. Despite this, he continues his criminal ways of smuggling and selling drugs, presumably to children. He is very persistent and determined, and even though his methods can be crude, does his best to forge, bribe, or charm his way to what he wants. 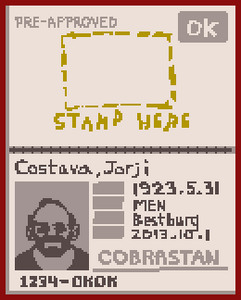 Jorji in the 2018 short film.
Add a photo to this gallery

Retrieved from "https://villains.fandom.com/wiki/Jorji_Costava?oldid=4334259"
Community content is available under CC-BY-SA unless otherwise noted.