Jormungandr, the Midgard Serpent, is an enemy of Thor in Marvel comics.

A scientist named Albert, while standing beneath a statue of the Midgard Serpent, saw tears dripping from its eyes. He collected the tears into a test tube and brought them back to his lab for study. He ultimately discovered that the tears were a universal solvent which could dissolve through anything, but this meant that he could not contain the solvent in anything, and it threatened to dissolve the Earth.

As Ragnarok seemed to draw near in Asgard, Hela brought the Midgard Serpent forth to launch an attack, and Thor found himself nearly powerless against it, having lost his hammer Mjolnir to Red Norvell. Norvell himself came to Thor's rescue, and fought the serpent all the way back to its lair, seemingly perishing in the process. When the serpent returned, Thor faced it again, now armed with Mjolnir; he managed to strike it down, and beat it until it vanished, bringing the seeming-Ragnarok to a halt.

As part of their scheme to overthrow Odin, Loki Laufeyson and Tyr captured the Golden Apples of Idunn and fed them to the Midgard Serpent, whom they found gnawing upon the roots of Yggdrasil.

To complete Odin's defeat, Loki had the serpent stretch itself to Earth so that his armies could follow Odin and those loyal to him. As they fought, the serpent wound itself around the Earth and began to crush it within its coils. Thor quickly enlisted the giant Hamir to assist him in baiting the serpent with an ox on a fishing pole. The serpent took the bait, and Thor dragged it free from the Earth and fought it. The serpent finally asked Thor to cease their fighting as they were evenly matched, and Thor agreed on the condition that the serpent return the golden apples. The serpent did so, and Thor then lashed it to Yggdrasil so that it could continue to gnaw upon its root.

Seeking the downfall of Thor, the Frost Giant Grundroth sought out the Midgard Serpent in the oceans of Earth, and used one of his men as bait to raise the serpent to the surface. The serpent took the appearance of the alien dragon Fin Fang Foom to communicate with the giants, and learned from them that Thor had been cursed by Hela to have old, brittle bones without the ability to heal his wounds. Seeing an opportunity to destroy Thor utterly in order to spare himself from death in Ragnarok, the serpent sought Thor out and came upon him in a park in Brooklyn. However, the serpent did not recognize Thor because of the armor he had donned to protect his damaged bones. Thor informed the serpent that he would oppose him, and the serpent responded that if he could lift one of his feet from the ground, he would face him in combat in a place away from innocent bystanders. Thor succeeded, and the two flew off to a secluded valley for combat.

There, the serpent dropped the form of Fin Fang Foom and appeared before Thor in its true form. At that instant, all time on Earth stood still. Thor then informed the serpent who he was, and swore to destroy him.

The two enemies engaged in a ferocious battle, during which Thor broke the serpent's teeth when it tried to swallow him. Finally, the serpent launched itself at Thor for its death strike, but Thor came back at it, unleashing the unfettered might of Mjolnir. The energies unleashed slew the serpent, while simultaneously reducing Thor's body to pulp.

The Midgard Serpent was released from Hel by Kurse to use as a minion against Thor on Earth, alongside some Frost Giants, Nidhogg, Forsung, Fafnir the Giant, and Fafnir the Dragon.

Thor faced the Midgard Serpent in battle, but was quickly swallowed up. Unable to break free from its belly, Thor found himself exposed to the venom of the serpent's breath, and began to drift unconscious.

Thor was saved from death by Beta Ray Bill, who tore a hole through the serpent's stomach to reach him. The two hammer-wielders were able to smash their way out of the serpent's belly by combining the power of their hammers, and the Midgard Serpent faded back into Hel.

The Midgard Serpent was among the Asgardian menaces summoned to Earth by Morgan Le Fay to distract the Avengers while she abducted the Scarlet Witch. The Midgard Serpent surfaced in the South Pacific, where it was opposed by a team of Avengers led by the Black Widow.

As Thor lay defeated following his battle with Loki, the Midgard Serpent attempted to devour him, but Thor blasted it in the face with energy from Mjolnir as he teleported to Earth.

During the "Last Days" part of the Secret Wars storyline, King Loki (an eviler version of Loki from an alternate future) frees the Midgard Serpent from Hel and rides on its back as part of a plot to attack Asgard.

Jormungard possessed colossal strength, the extent of which was never measured but which far surpassed Thor's Class 1000 level, whereby Thor can lift well over 1000 tons. In addition to his vast and fearsome strength, Jormungard was virtually invulnerable to injury and conventional weapons. Only a being as strong a Thor could cause him serious bodily harm. The Midgard Serpent was apparently immortal except for the fact that he could be killed by extraordinary physical force.

Jormungard usually existed in an ethereal form on Earth. Hence, though his size was so great that he encircled the planet, he was invisible and intangible as far as human beings were concerned. By compressing his coils about the planet, he could magically cause storms, earthquakes, and other disasters. Even in his final battle with Thor, although his front portion materialized on Earth, Jormungand kept most of his body in ethereal form. If he had not, his immense bulk would have crushed buildings and people around the globe.

Jormungard could cast illusions to disguise his true appearance, such as when he caused himself to appear as Fin Fang Foom and as Loki's cat.

The Midgard Serpent was a sentient being and was fully capable of human speech and a arrogant personality. Unlike other serpents, he possessed clawed forearms. The venom in his fangs was lethal, even to Asgardian gods.

Thor with Battle Armor vs Jormungand. 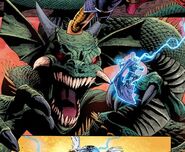 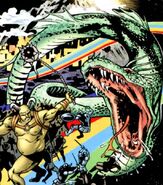 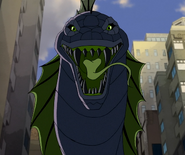