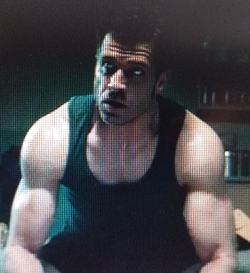 He was portrayed by Jackson Spidel.

According to Barnes, Josef was handpicked alongside four more assassins by Soviet colonel Vasily Karpov to do HYDRA's dirty work around the world. They happen to be capable of detection and have the highest kill count of all HYDRA history, even before they were injected with the Super Soldier Serum. Barnes also stated that are able to take down a country overnight given by their enhanced abilities. While being injected with the serum by Karpov, Josef complained of how much it really hurts, prompting an annoyed Karpov to get his soldiers to restrain Josef in a bed until he cools down.

Barnes also confessed that he was tasked by Karpov to train in combat to provide better strength and insight for Josef and the Winter Soldiers. However, as the training exercises were done, Karpov and Barnes were horrified to learn that Josef and the other Winter Soldiers lost control and initiated a riot against the other HYDRA soldiers, beating them down to their deaths. As such, Karpov is forced to detain Josef and the others in cryogenic chambers to cool their minds down until further orders.

25 years later following the dismantling of HYDRA, Karpov was killed by Helmut Zemo, who steals Karpov's book containing the trigger words to activate the Winter Soldiers. Upon hearing of Zemo's crimes following the Vienna bombings, Barnes (along with Captain America and Iron Man) deduce that Zemo is heading to the Soviet facility where the Winter Soldiers are located, believing that he might unleash them to the world.

Though the three heroes made to the facility, they are surprised to see that all the Winter Soldiers, including Josef, have been shot to their deaths by Zemo, who reveals that his intentions to release the Winter Soldiers was just a ruse to cover his true plan of tearing apart the Avengers to avenge his family (who died at the Avengers' battle against Ultron at Sokovia).

Zemo then revealed exclusive footage of Barnes murdering Howard and Maria Stark after being brainwashed by Karpov, which resulted a fight between a vengeful Iron Man (who wanted to kill Barnes for this) and Captain America (who attempted to defend Barnes). This resulted a stalemate and the Avengers to be officially disbanded, though Zemo ends up being arrested and taken into custody for his crimes despite his success.

Josef and the other Winter Soldiers about to receive the serum.

Josef shot to death by Zemo.
Add a photo to this gallery

Retrieved from "https://villains.fandom.com/wiki/Josef_(Marvel_Cinematic_Universe)?oldid=3465703"
Community content is available under CC-BY-SA unless otherwise noted.