Wipe out all Conduits by spreading fear and mistrust of them.
Kill Cole MacGrath (both failed).

Joseph Bertrand III, also known as The Behemoth in his corrupted form, is one of the two main antagonists of the 2011 game, inFAMOUS 2 (alongside the Beast). He is the leader of the New Marais section of the First Sons, leader of the Milita, and the creator of the Corrupted. An insanely fanatical man, Bertrand's ultimate goal is to destroy all Conduits based on the fact that his ability is to turn into a monster.

He is voiced by Graham McTavish, who also portrayed Loki Laufeyson in The Avengers: Earth's Mightiest Heroes, Dracula in Netflix's Castlevania, Zoran Lazarević from Uncharted 2: Among Thieves, the Saint of Killers from Preacher and both Father Kinley and Dromos from Lucifer.

At some point, Bertrand discovered that he was a Conduit, a human with the potential to unlock incredible superpowers. Deeply religious, he believed this to be a sign from God that he was meant to be a savior to mankind. Spurned by this goal, Bertrand joined the "First Sons", an organization with many Conduit-related interests, led by a mastermind named Kessler. Using their advanced technology and resources, a scientist under his control, Dr. Wolfe (who had secretly turned against the First Sons and was leaking information to the NSA) created a Ray Sphere for Bertrand to unlock his Conduit potential - a process which required the deaths of dozens of innocent lives.

However, the powers he obtained were far from what he had wanted - instead of becoming a "shining superhuman", he gained the ability to transform into a "50 foot maggot" known as the Behemoth. Disgusted (and unable to fully control this form), he interpreted it as a sign from God that Conduits were subhumans who should be destroyed. To this end, he kidnapped local Conduits of his hometown, New Marais, and (using new powers that Dr. Wolfe helped him acquire) turned them into monsters known as The Corrupted.

After allowing them to terrorize the populace (and spread fear and mistrust of Conduits), he publicly organized "The Militia" to bring order to the pandemic he had secretly caused, becoming the ultimate authority in New Marais, with the Militia continuing to seek out and abduct Conduits to be transformed into The Corrupted. Following Kessler's death in Empire City, he then took over much of the First Sons' resources, and set his sights higher. He offered a large private security firm, South African-based Vermaak 88, the opportunity to infuse them with superpowers (accomplished by kidnapping Lucy Kuo, slowly and painfully unlocking her Conduit powers, and using a Transfer Device, developed by Wolfe, to give her powers to the non-Conduit mercenaries - an unnatural process that caused their bodies to mutate and their minds to degrade over time).

However, instead of simply giving them powers and letting them leave, he planned on boxing them up and selling them to warlords to kickstart a new Conduit-fueled arms race that would cause the entire world to fear Conduits. This plan eventually failed, however, due to the interventions of Cole MacGrath, who exposed his connection to the monsters, turned the public against him, dismantled the Militia, prevented any shipments of the mercenaries from leaving, and killed Bertrand after he assumed his Behemoth form.

Bertrand is a natural Conduit, with the potential to unlock incredible powers through Ray Field radiation. By setting off a Ray Sphere with a large number of people nearby, these Conduit powers are unlocked. His primary ability is to transform into a gigantic monster called the Behemoth. This transformation isn't entirely voluntary, as he warns Cole at one point that he could turn into it again if he is further provoked. Afraid of his lack of control of the Behemoth form, he tried to get Dr. Wolfe to undo the process, but such a thing is impossible. They attempted some experiments anyway, and through the use of Blast Cores, he gained the ability to forcibly transform a potential Conduit into The Corrupted. These monsters are initially uncontrollable, but will come under his complete control with some work. 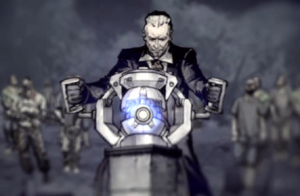 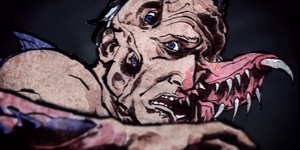 Bertrand revealed as the Behemoth after his first fight with Cole.