Joseph Daniel "JD" O'Toole is a supporting antagonist in Grand Theft Auto: Liberty City Stories. He's an obese Irishman who runs Paulie's Revue Bar in the Red Light District in Portland. He was never admitted to Sindacco Family because he is not Italian. Unsatisfied, JD becomes the Leone Family plugin at Sindacco.

He is voiced by Greg Wilson.

He helps the Leone family to thwart Salvatore's murder, to protect Leone's casino, and to destroy the Sindacco casino. These Leone victories eventually lead to a gang war as a result of which Sindaccos are expelled from Portland. Paulie's Revue Bar, goes under Leone's control, and turns into at Luigi club.

O'Toole was also in prison for sleeping with a minor girl (she said he was 18). He was also suspected of having child pornography, but the FBI found nothing to do with it. JD was killed during the ceremony of accepting him to the Leone Family. He was taken to a Harwood crusher, and killed by Mickey Hamfists' shot from the revolver in the back of the head - on the orders of Salvatore, who did not trust JD because he allegedly betrayed the Leone family. The car with his body was abandoned at the bottom of the sea. 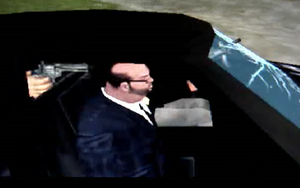 Joseph's last moments before being shot in the head. 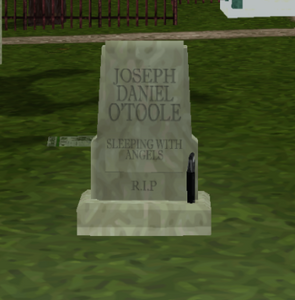