Ranting against his enemies.

Turn the tide of WWII (failed).

Kill himself and his family before the Russians take over (succeeded).

Joseph Goebbels is one of Adolf Hitler's closest supporters and the secondary antagonist of the epic history drama Downfall.

He was portrayed by Ulrich Matthes.

Goebbels appears excessively anorexic due to the stress of the war. He wears a yellow suit which makes him very easily identifiable among the other Nazis.

Amidst all Nazis inside the Führerbunker, Goebbels was the most fanatical and obedient to Hitler, almost to an inhumane degree (which isn't helped by his appearance). Goebbels had an unflinching devotion to Adolf Hitler and its totalitarian ideals, which he considered to be the ultimate form of societal organization. When he dinned with the Führer, Goebbels agreed with him that the weak elements of a society should be weeded out, along with what he deemed as “inferior races” (namely the Jewish people and the Slavs). Goebbels was so loyal to Hitler that he disobeyed his order, which was to flee Berlin, and remained there until his death.

As such, Goebbels categorically refused to surrender to the Red Army and made it clear numerous times, especially in the famous scene where Goebbels rants in front of the remaining generals, that he'd better die than be captive of the Russians. In fact, Goebbels considered the “Reds” (i.e. Russians) to be lesser than beasts and the worst threat they could face, so he was willing to negotiate a treaty with the Western Allies, although he would never have accepted unconditional surrender.

The war turned him into a merciless and wrathful wreck. When Mohnke told him that the Volkssturm — the last Reich's soldiers — were falling like flies, Goebbels swiftly retorted him that he didn't care about their sacrifice, blaming them for their inability to fight back. Much like Hitler, Goebbels never questioned himself and always considered to be in the right.

Goebbels was as delusional as Hitler, if not even more so, as he genuinely believed until the very end that smaller and smaller battalions of starving soldiers in a sorry state without sufficient ammunition and training could crush the overwhelming Russian forces.

Like Hitler, Eva Braun, and most Nazis generals, Goebbels killed himself after he dealt with his wife when he realized that all hope was lost for the Nazi regime. Goebbels also approved Magda's poisoning of their own children, as both couldn't stand to let them live in a world free of Nazis.

He is the Minister of Propaganda in Nazi Germany, much like his real-life counterpart. Goebbels was also responsible for implementing the antisemitism policy into the Nazi Party. He was one of the few Nazi leaders to be extremely loyal to the Fuhrer.

During the closing days of the Second World War, Goebbels, his wife, and their children took up residence in the bunker along with Hitler and other high ranking Nazis. He was present during Hitler's rant after learning Felix Steiner did not carry out the assault Hitler had ordered Steiner to carry out. Later, he was present at a dinner with Hitler, during which he shares with Hitler his distaste for weak people.

When Hitler committed suicide, Goebbels was appointed as the new chancellor of the Nazi Party. None of Hitler's former general took Joseph Goebbels seriously (except Wilhelm Burgdorf) because of his lack of charisma. However, when Vasily Chuikov requested that the Nazi government surrender, Goebbels denies, due to Hitler forbidding any type of surrender.

When Soviet troopers began marching into Berlin, Goebbels and his wife planned to die along with Hitler. The night after Hitler shot himself, Goebbels' wife poisoned each of their six children with cyanide, then went outside. Goebbels shot his wife, then himself, hoping to prevent the Red Army to capture him. 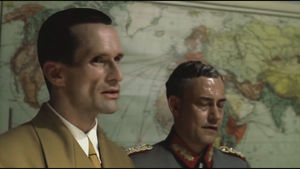 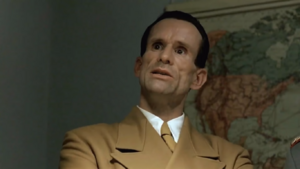 Goebbels tells the generals that they should try to contain the Russian forces until the Western Allies arrive, so to make Germany's defeat much more bearable. 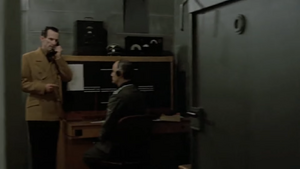 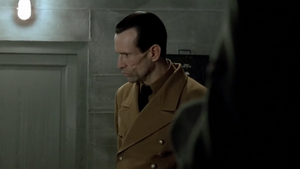 Goebbels before answering to Mohnke's objections. 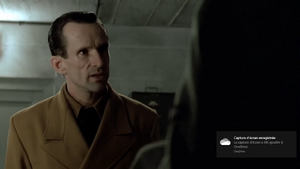 Goebbels tells Mohnke that he doesn't care of the German soldiers.
Add a photo to this gallery

Retrieved from "https://villains.fandom.com/wiki/Joseph_Goebbels_(Downfall)?oldid=4150083"
Community content is available under CC-BY-SA unless otherwise noted.