"Josh" (real name unknown) is the unseen main antagonist of the 2011 found footage-horror film Megan Is Missing. He is the abductor, murderer, torturer and rapist of Megan Stewart and Amy Herman.

He was portrayed by Dean Waite.

While not much is known about Josh, he appears to be around 17 (though this may have been a lie conjured up to get Megan to his side) and at first, appears friendly and romantic. However, towards the end of the film, Josh reveals his true nature; a psychopathic and twisted stalker who tortured and murdered Megan, and is prepared to do the same to Amy, partly to prevent her from exposing him to the authorities, but mainly out of sadism.

Josh is a disturbingly realistic portrayal of a stalker in film, as he is emotionally manipulative to Megan to fool her, and underneath the charm, he is incredibly ruthless underneath. He kills Amy so she does not find out where he lives, despite promising to let her go (which turned out to be a lie).

Not much is seen of Josh except for extremely brief and subtle glimpses in the middle of the movie, where Amy records herself under the bridge, footage of Josh kidnapping Megan from behind the diner (unclear, with his face out of view) and during the final scenes between him and Amy where parts of his body are occasionally seen (but never shown his face).

Josh is a seventeen (so he claims) year old boy who the fourteen-year-old Megan meets on webcam. They bond immediately, and though Josh doesn't show his face, Megan decides to meet him in the person behind a diner. When she disappears, Amy decides to investigate by talking to Josh personally. She finds his answers about Megan suspicious and tells the cops. When the police decide to investigate, Josh becomes more hostile to Amy and tells her to keep her mouth shut, threatening her life.

Eventually, the FBI discovers a disturbing image that apparently shows Megan being tortured. Amy goes to her "secret favorite place" (under a bridge) and records herself, unaware that Josh is stalking her and is planning to silence her. The second time she does this, Josh grabs her and cuts off the camera. When investigated, Amy's camera is found in the garbage. The last twenty minutes of the film occur in Josh's basement when he reveals the internet predator he really is. Amy, chained to a wall and stripped nearly naked, is forced to eat dog food before Josh rapes her. After this, Josh falsely promises he'll let her go, and shows Amy a barrel.

Upon inspection, the rotting, slimy corpse of Megan is found, killed by Josh in a grisly fashion, and Amy runs screaming. Before she can escape, Josh seizes Amy, stuffs her into the barrel with the dead body of Megan, and drives away with it with her still inside. Unloading it at dawn in the woods, Josh takes the barrel and digs a large hole in the ground. Though Amy screams, her pleas are without cause as Josh buries her alive and walks off, not to be seen again. 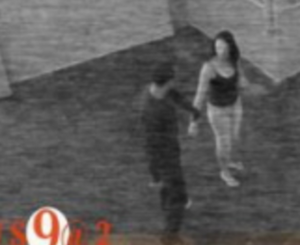 "Josh" with Megan in a security camera footage.
Add a photo to this gallery

Retrieved from "https://villains.fandom.com/wiki/Josh_(Megan_Is_Missing)?oldid=4158953"
Community content is available under CC-BY-SA unless otherwise noted.