Josh Diaz is a chimera hybrid created by the Dread Doctors and a member of Theo's pack, after being killed and resurrected by him. He is a antagonist in season five of MTV's horror series Teen Wolf.

He is portrayed by Henry Zaga.

On the top of the hospital, Josh is eating a power cable. Later, Stiles comes onto the roof but doesn't see him. He then jumps on top of him and begins to attack him. Stiles fends him off. Theo arrives and takes on the chimera. He gets the guy by the throat, and then kills him.

Josh is resurrected after Theo kills Scott and becomes a member of Theo's pack. Theo's Pack are breaking into Eichen House to get Lydia. A guard hears Tracy attacking the other guard and tries to use his walkie talkie. He realizes something is wrong so he gets his cattle prod out. He turns around to see Josh standing there and attempts to hit him but Josh absorbs the electricity whilst killing the guard. Once the pack are inside Lydia's room he says "She doesn't look good" whilst looking down at her. Josh and Theo are outside Sinema. Josh explains that he took a lot of drugs but they weren't working. Theo says that he heals too fast and Josh says he should have left him for dead. Theo gives him a pair of jumper cables to hold on to. He attaches them to the battery and Josh roars as electricity sparks around his hands. His eyes glow purple. Later, Josh and Tracy attack Scott but Josh ends up paralyzed because Scott grabs Tracy's wrist and her claws go into his chest, killing him. He is then carried out by Corey and Tracy. 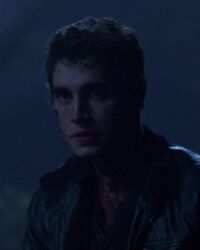 Add a photo to this gallery
Retrieved from "https://villains.fandom.com/wiki/Josh_Diaz?oldid=3528397"
Community content is available under CC-BY-SA unless otherwise noted.