Kill his step-brother Drake to replace him (failed).

Josh Nichols is a minor antagonist in season eleven of Robot Chicken, serving as the main antagonist of the sketch "Drake & Josh Face-Off".

He is voiced by Josh Peck, who reprises his role from the television show Drake & Josh. Josh Peck has also voiced Randall Julian in Fillmore!.

After Josh unsuccessfully flirts with a group of girls only to have his step-brother Drake effortlessly convince them to take turns making out with him. Lamenting on how easy Drake's life is, Josh decides to ambush Drake in the locker room where he knocks him unconscious and then swaps Drake's face with his own.

After waking up, Drake is horrified at what Josh is done and begins to fight with him until Josh pulls out a gun. Drake questions where he got it from, to which he replies since he's attractive now, somebody just gave it to him on the street. Drake then reveals to Josh that is was a rhetorical question since has two guns of his own he got the exact same way.

Drake and Josh start shooting at each other indiscriminately until their boss orders them to stop and then fires "Josh" for it, allowing "Drake" to get away with it since he's attractive. Josh suddenly tries shooting Drake once more but misses and hits a popcorn maker that blows up the entire movie theater. Outside, Josh is arrested and his plan backfires once he learns that because he's so attractive now, he's most likely going to be raped in prison. 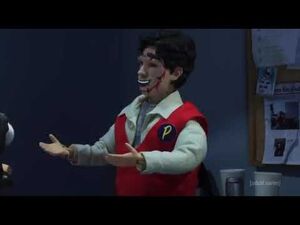