Hold President Daniel Binder hostage at the Civic Arena during the Stanley Cup Finals, and have millions of dollars wired to his offshore accounts by the end of Game 7 before destroying the arena with explosives.

Joshua Foss is the main antagonist in the 1995 film Sudden Death.

He was portrayed by the late Powers Boothe, who also portrayed Senator Roark in Sin City, Gorilla Grodd in the DC Animated Universe, Curly Bill Brocius in Tombstone, Benjamin Travis in Hitman: Absolution, Roland Kane in Turok and Cash Bailey in Extreme Prejudice.

Foss is a former government official, now a terrorist leader, who holds Vice President Daniel Binder and various other VIPs hostage in a luxury suite at the Civic Arena. He had previously wired the arena with explosives and intends to detonate them at the end of Game 7 of the Stanley Cup Finals. During this time, he would have millions of dollars wired to his off-shore accounts. Fire marshal Darren McCord is forced to make the game go into overtime in order for him to save his children from Foss.

At the end of the film, Foss disguises himself and tries to escape, but Darren's daughter Emily recognizes him. Foss captures her and Darren gives chase, eventually confronting him at the top of the arena. Foss manages to climb into a helicopter but before he can get away, Darren shoots the pilot dead. With no one to steer it, the helicopter falls into the arena, with the screaming Foss still inside, and crashes into the ice before exploding and killing Foss. 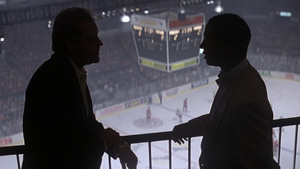 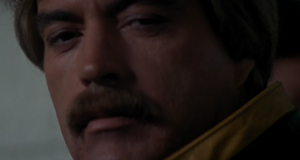 The death of Foss.