Discussing plans for the future.

Help Cade Yeager, Optimus Prime and the Autobots stop Harold Attinger, James Savoy and Lockdown to take the Seed away from Earth (succeeded).

Joshua Joyce is a major antagonist in the 2014 film Transformers: Age of Extinction. He is the arrogant CEO of a high-tech corporation called KSI.

He was portrayed by Stanley Tucci, who also played Vernon in Beethoven, George Harvey in The Lovely Bones and Lord Roderick in Jack the Giant Slayer.

Joshua Joyce is a strict and demanding employer. His ambition made him use his genius to build his own models of Transformers he could control and never be betrayed by them. However, his arrogance blinded him to the fact that he was manipulated by both Attinger and Megatron. Joyce is not without redeeming qualities, however, as he genuinely believed that what he was doing was for the good of mankind.

He was appalled when Galvatron killed civilians in his pursuit of the Autobots after the attack on the KSI headquarters. He initially blamed it to a flaw in Galvatron's programming, but after Cade Yeager speaks to him on the telephone to notify him that Galvatron was hacked and manipulating him to get the Seed, he clearly does take Yeager's advice seriously and decides to postpone his use of the Seed, much to Attinger's disgust.

Joyce initially came across as a coward and a hypocritical complainer, whining to Cade and Autobot Hound for involving him into a battle against KSI Decepticons, but they retaliate against him by verbally arguing back that at least they are fighting to save Earth while he is not. However after Lockdown had been killed and all the remaining KSI drones defeated, he did offer to help Cade to rebuild his life as a show of gratitude.

His company was hired by retired CIA agent Harold Attinger to build artificial, remote-controlled Transformers due to Attinger planned to hunt down the Autobots. Joshua himself thinks the Autobots are only junk compared to his creations.

This was shown when Cade, Optimus Prime, and rest of the protagonists and Autobots talk to him for the first time, Joshua openly told them that the Earth no longer needs actual Autobots anymore. However, when he uses Galvatron to capture Optimus Prime, Galvatron is briefly out of control due to Megatron's possession. Despite this, he thought that it is just a technical problem.

Afterwards, Joshua slowly has a change of heart after briefly conversing with Cade Yeager who tried to warn him of who Galvatron really is from what he learned from Optimus Prime along with the Seed that Attinger covered all this time. This made Joshua start to see Attinger for who he truly is based on the knowledge Cade gave him, in which he reminded him of mistakes that he had done.

He confronted Attinger to question their mutual cooperation, only to had Attinger reveal that all this time, Attinger has manipulated him as a mere pawn for him (refer him nothing but a golden parachute for his success). Before he even had a chance to cope with all of this, Galvatron reactivated along with other fifty artificial Transformers. He then betrays Attinger, took the Seed away from him, and disobeys Attinger's demand to re-control Galvatron.

A chase ensues in China, where he met with other human protagonists to help him took the Seed away, but is ambushed by both Galvatron's forces, Attinger and his right-hand man James Savoy. He helps the Autobots and Cade Yeager to fight Galvatron and his army. Fortunately for him, just as his hacked Transformers gain the upper hand, Autobots, with help of the Dinobots, quickly overpower them and most of the hacked Transformers are killed, while the rest of them have escaped.

After the battle, he promises Cade Yeager and his family that he will help them get a new home. He also apparently ended his Transformers development project after a change of heart. Since he didn't appear in the fifth film, it is heavily implied that he avoided becoming a Transformers sympathizer after ending his project. 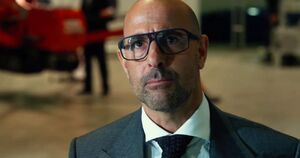 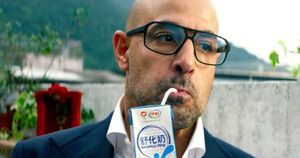 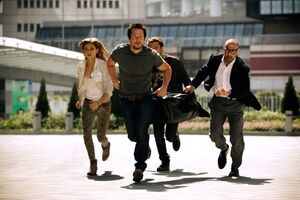 Joshua in the sunset. 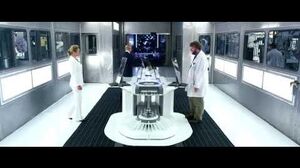 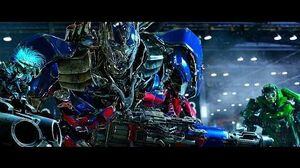 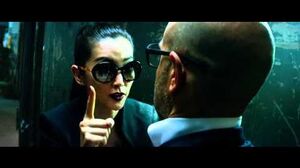