Benefit himself with war profits.

Receive the Rubicon codes from A.R.G.U.S. (both failed).

Mercenary
Lieutenant Joyner is a high-ranking member of Shadowspire and an antagonist in the fourth season of Arrow.

He was portrayed by Erik Palladino.

After a mission with John and Andrew Diggle, Lieutenant Joyner apporaches the brothers, trying to recruit them to Shadowspire. Though declining the offer in front of John, Andrew secretly accepts it.

At one point, Andrew was called to Joyner's tent, where Joyner hands him an envelope full of cash. When tells Joyner that he has already received his monthly pay, Joyner claims that it is a token of appreciation from the boss as he was able to trade the opium for something else. When asked what the boss traded the opium for, Joyner tells Diggle to ask the boss himself. Diggle is then introduced to Baron Reiter, who reveals that he has traded the opium for the location of a place of immense power and reveals to him a map of Lian Yu.

He sends Shadowspire soldiers to capture A.R.G.U.S. agent Chang, whom they torture before cutting out one of his eyes.

When finding out that Shadowspire is in Star City, Andrew Diggle tells his brother about a possible location of their hideout. Heading there, Team Arrow defeats the Shadowspire soldiers guarding the outer perimeter, and then enter the warehouse. There, they search for the two missing agents. While searching a shipping container, Oliver is trapped when Felicity accidentally triggers a failsafe which closes the container's doors. Meanwhile, Thea and Laurel find the missing two agents in another shipping crate, both dead. Inside the warehouse John is overpowered by Shadowspire soldiers and after he drops his gun, is approached by Joyner, now a high ranking operative. Joyner states that while he has heard much about the vigilantes, he has never seen on in person. John responds that he wishes the same would go for him with cold blooded murderers, causing Joyner to ask whether they have met before. However, Joyner and the rest of the soldiers are knocked out when Oliver blows up a wall of his container to escape. Diggle and Oliver then flee from the compound.

With the eye from Chang, Joyner and Shadowspire gain entrance to the A.R.G.U.S. headquarter. Arriving at the control room, Joyners men kill many A.R.G.U.S. agents and then capture Waller and John Diggles wife Layla. When Amanda Waller recognizes him, she asks him whether this is retribution for A.R.G.U.S. crippling Shadowspire. Joyner tells her that vengeance and retribution don't pay and reveals that he has come for Rubicon. When Waller refuses to give him the codes, Joyner has an agent executed and tells Waller that he will ask her in twenty minutes.

After twenty minutes have passed, Joyner approaches Waller again, asking whether he has to downsize her organisation again. Waller replies: "Apparently!". Joyner states that this is rather cold blooded, to which Layla exclaims that he doesn't seem to know Waller. Both Layla and Waller confirm that Waller is perfectly capable of watching Joyner execute every person in the room and still not give him the codes, so Joyner shoots Waller in the head and tells Layla that she now has twenty minutes.

To save Layla and the rest of the agents, the both Diggle brothers produce a plan. Andrew, who was imprisoned at A.R.G.U.S. detention cells is brought before Joyner, who is surprised to see him, having believed him dead. Andrew tells him that he was imprisoned by A.R.G.U.S. for working with spitfire and tells Joyner that Layla is his sister-in-law. He tells Joyner that John is crawling around in the ventilation shafts and that Layla would give up the Rubicon codes if John's life were at stake.

Joyner's men find John and force Layla to give up the code. When Layla, although trying, is unable to get into the computer as she is blocked out by Felicity, Joyner plans to shoot John but is attacked by Andrew. The rest of Team Arrow then appears and take out the Shadowspire soldiers, while Andrew knocks out Joyner after a fight. 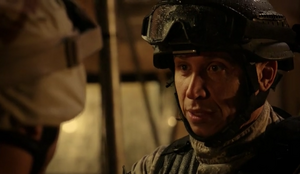 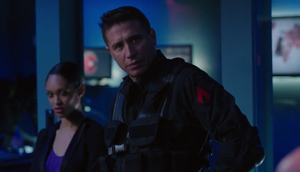 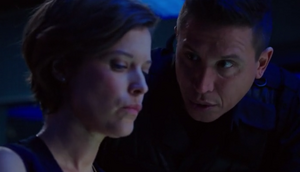 Joyner demands the codes from Layla