Master Jr. Troopa (by himself)

Trying to get power.
Challenging Mario.

Defeat Mario and be stronger than him.

Jr. Troopa is a recurring antagonist in Paper Mario. He constantly tries to ambush Mario and his friends during their quest to save the Star Spirits and defeat Bowser. He is a fighter kid who wants to defeat Mario at any cost to prove himself to be stronger than him.

Jr. Troopa is a young Koopa who uses his eggshell to protect himself from any attack. He has his own territory called "Jr. Troopa's Playground". He always likes to bully any kid in his sight. After Mario went to his territory to get the Goomba's Hammer, Jr. Troopa notices him and challenges Mario to a battle in which Mario wins thanks to the new ability of the Hammer. After his defeat, Jr. Troopa becomes obsessed with getting revenge on Mario for defeating him.

He follows Mario throughout the game to ambush him and his friends and reveal the new power that he acquired at the end of Chapter 1. However, Mario beats Jr. Troopa again.

He later returns in Chapter 3 after defeating Tubba Blubba, where he is lost in the forest after trying to follow Mario and though he is glad to see him, Jr. Troopa challenges Mario again and reveals his new ability to fly thanks to his wings but is once again defeated.

In Chapter 5, after defeating Lava Piranha, Mario and his friends are about to return to Toad Town just when Jr. Troopa arrives at Lavalava Island via swimming, but arrives too late as Mario and his friends already departed to Toad Town, leaving Jr. Troopa to swim again to return to Toad Town where the battle starts with an already exhausted Jr. Troopa who has a new ability to produce a spike on his eggshell, but nevertheless is defeated again, realizing that he should have used his wings to fly there rather than swimming.

In Chapter 7, Jr. Troopa tries to defeat Mario this time using magic powers thanks to a wand. However, Mario beats him again and Jr. Troopa is left behind. He can be seen frozen in an ice block if Mario leaves the area he was fought in and returns.

In Chapter 8, Jr. Troopa makes his final fight to Mario when he arrived to ruin the return of the Koopa Bros.. This time Jr. Troopa will use all his forms used in the previous battles against him. After a great battle, Jr. Troopa is finally defeated but not without telling Mario that he will never give up.

Jr. Troopa is last seen in the credits battling Kammy Koopa until they attack Bowser by accident, who burns both of them for what they did to him.

Jr. Troopa makes a cameo in the background of Zip Toad's photo with the same form he used to battle Mario in Toad Town. This could mean that Jr. Troopa is still obsessed with finding Mario and defeating him.

Jr. Troopa at first was easy to defeat as he only jumped on Mario to attack him. However, throughout the game, Jr. Troopa improves himself, becoming stronger battle after battle. He learns the power to protect himself by hiding in his eggshell. He also gets the ability to fly and attack Mario after getting his own bat wings. Jr. Troopa also has the ability to put a spike on his eggshell to prevent Mario from jumping on him and make his attack cause more damage to Mario. He also learned to be a magician as he got his own wand which creates balls of magic to attack Mario. Somehow, Jr. Troopa is also able to change his form during the final fight against him. 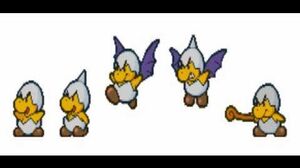 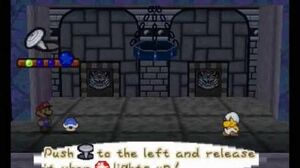