Deity of the Bayonetta universe

Create a new universe in order to reunite the Trinity of Realities into one (failed).

Jubileus the Creator is the final boss in Bayonetta. She is the creator of the universe and her goal is reunite the Trinity of Realities back into one by creating a new universe. Previously, in the First Armageddon, she was imprisoned into a statue.

She is voiced by Grey DeLisle who provided voices of Azula from Avatar, Mandy from Grim & Mandy and High Priestess from Samurai Jack.

The true name of Jubileus, as recorded in myth, is actually constructed from unutterable syllables. This is because humans remain incapable of capturing her true glory, as she is the total embodiment of Divine Will.

Humanity, bound to the physical world, was forced to depict and describe her in its own tongue. It is supposed that humanity selected the name Jubileus, taken from the word Jubilee, meaning a celebration of rejoicing, in an attempt to turn Divine Will into worldly happiness via repeated recital of her name. As a result of the cataclysmic events of the ancient First Armageddon, of which she sat at the very apex, Jubileus was forced into dominion over the world of Paradiso, governor of the light amongst the Trinity of Realities, and put into an endless slumber.

It was from this point that the forces of light and dark began their endless battle for hegemony. The resurrection of Jubileus will trigger a reunification of the Trinity of Realities, fulfilling the desires of not only the forces of light, but also a centuries-old prayer said by those seeking divine intervention.

Throughout the game, when Bayonetta defeats an angel of virtue, it utters: May Jubileus, the Creator, grace you! Bayonetta later discovers that the Eyes of the World are not items but they are people who best represent the aspects of the light and the dark. When the Eyes of the World are placed within the physical frame of Jubileus, she will awaken and reconstruct reality. After trapping Bayonetta, Father Balder joins her in the statue of Jubileus and takes off into space. Jeanne leaps into action and goes after the goddess. Bayonetta is swiftly freed from Jubileus, preventing the goddess from reaching full potential. However, Balder is absorbed into Jubileus, awakening the deity and unleashing a cosmic horror. Despite being a goddess, Jubileus was not bequeathed with the powers of the Left Eye, leaving her with only the strength of the Right Eye. As a result, Bayonetta was able to destroy the cosmic horror. After a grueling battle, Bayonetta binds Jubileus before entering a joint summoning with Jeanne. Together, they were able to unleash a demon of terrible power, known as Queen Sheba. Queen Sheba, being the pure embodiment of darkness, is able to slam Jubileus straight into the sun. Jubileus' spirit is consumed within the fires of the sun and the 2 witches destroy the physical vessel of Jubileus, leaving no trace of the goddess behind. In Bayonetta 2, her head is shown remained as a Statue.

The fight against Jubileus comes in five main stages and one Climax sequence:

Jubileus being released from imprisonment. 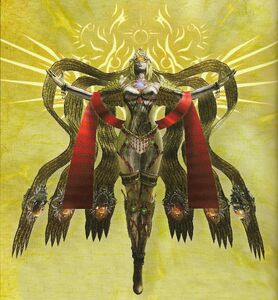 Jubileus in the Hierarchy of Laguna. 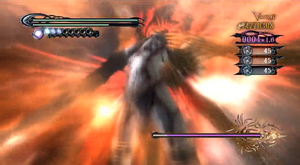 Jubileus performing her Fire Element attack. She uses a kind of body outrage. 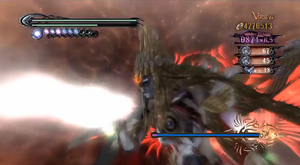 Jubileus performing her Ice Element attack. She uses a type of blow kiss. 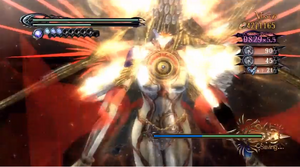 Jubileus performing her Lightning Element attack. She charges lightning in her body and then releases the charge by putting her arms into the air. 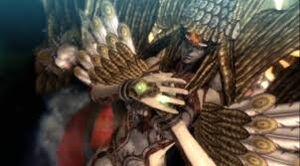 A view of Jubileus' upper body. 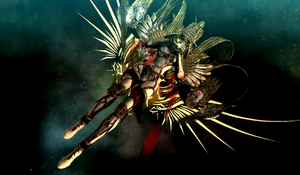 A view of Jubileus' full body. 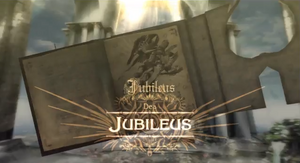 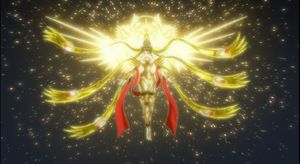 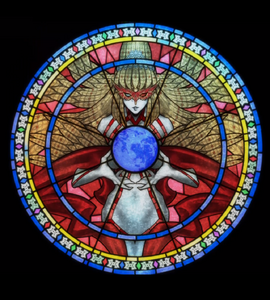 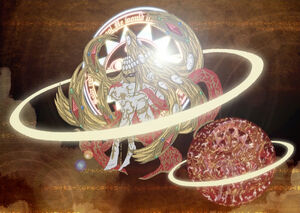 Jubileus might also be known as Jubilee, which is a special year of remission of sins and universal pardon. In the biblical book of Leviticus, a Jubilee year is mentioned to occur every 50 years, in which slaves and prisoners would be freed, debts would be forgiven, and the mercies of God would be particularly manifest.

Retrieved from "https://villains.fandom.com/wiki/Jubileus_the_Creator?oldid=4141274"
Community content is available under CC-BY-SA unless otherwise noted.