The Brokest Back in the West
Death Blade (possibly)

Jude the Dude is the second boss in the videogame Madworld. He is ranked 124th on DeathWatch.

According the Howard "Buckshot" Holmes, Jude has been in the games 10 times has become a regular fan favorite, due to his fancy moves, and lightning fast quick draws. However Kreese Kreeley hates Jude the Dude. According to Kreese, both he and Jude fought each other before, but when they fought, Jude kicked Kreese with his spurs and tore his scrotum.

Jude the Dude is a cowboy-based boss that skates. He fights by skating on top of rails, while trying to shoot Jack. When he runs out he tries to kick Jack with his spurs. During the power struggle, Jude the Dude shoots two bullets at the same time, horizontally, or vertically. The less health he has the longer and more complicated the power struggle gets. After Jude the Dude losses all of his health, Jack takes Jude's guns and rapidly shoots Jude until he's a skeleton. Jack then shoots Jude one more time causing his body to explode. 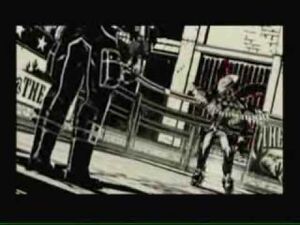 Jack about to fight Jude the Dude. 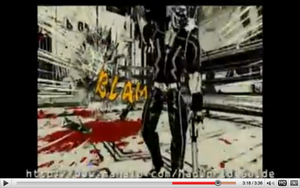 Jude the Dude's death.
Add a photo to this gallery 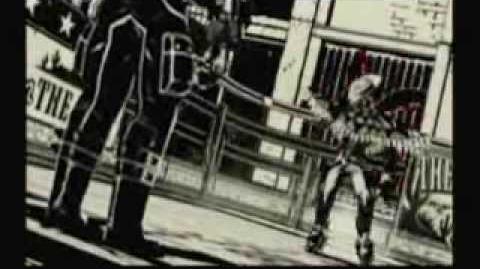 Madworld Boss Battles 2.- Jude The Dude
Jack Cayman vs Jude the Dude.
Add a photo to this gallery

Retrieved from "https://villains.fandom.com/wiki/Jude_the_Dude?oldid=3909187"
Community content is available under CC-BY-SA unless otherwise noted.