The Adventures of Bullwhip Griffin

Find gold and get rich.

Judge Higgins is the main antagonist of Disney's 1967 live action film The Adventures of Bullwhip Griffin, which is based on the 1963 American novel By the Great Horn Spoon! by the late Sid Fleischman. He is a nefarious thief with a disguise for every imaginable crooked caper.

He was portrayed by the late Karl Malden.

As Jack Flagg stows away aboard a ship bound for the California gold rush, he is followed by the family's very proper butler, Eric Griffin, who becomes the ship's cook. Also aboard is Judge Higgins.

As the ship approaches San Francisco, the judge steals the map of a gold mine from Quentin Bartlett, a Shakespearean actor, and sneaks ashore in the only lifeboat. Griffin, Jack, and Bartlett take pursuit and recover the map, only to find it riddled with bullet holes.

Nevertheless, they strike a rich gold deposit but lose the gold in a river when the judge, disguised as a Chinese coolie, tries to steal it from them. Arabella arrives in San Francisco to look for Jack and takes a job as a dancehall singer. Griffin, now nicknamed "Bullwhip" because he accidentally knocked the town bully unconscious, "Mountain Ox," decides to enter a boxing match to earn some money.

Encouraged by kisses from Arabella, Griffin wins the prize money and proposes to Arabella. The judge, disguised as a bookkeeper, tries to steal the money, but he is caught by the spectators and forced to lock himself in jail to avoid being lynched. 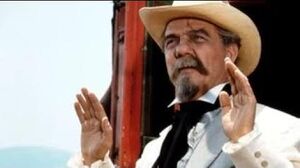