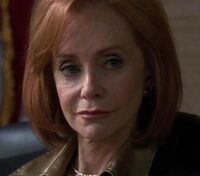 She was portrayed by Swoosie Kurtz.

Marsden worked as a judge for Manhattan and had a reputation for handing out harsh sentences to minor juvenile offenders. Every time a person who committed a minor crime, (public urinating, loitering, etc...) was brought before her court, she would turn the crime into a felony and ship them off to a facility for sex offenders at Wellsburg, Ohio. Though she claimed she was doing it for the greater good, the real reason was that she received financial kickbacks every time she sent someone to the facility, which happened to be owned by her cousin.

Her latest case was with a 15-year-old girl named Kim Garnet, who was a victim of domestic violence by her boyfriend, Steve Walker. Steve forced Kim to take nude pictures of herself and text them to him. At one point, she accidentally sent one to a friend named Ethan Morse, who also had a crush on Kim. Kim went to Ethan's house to clear things up, but Steve accused her of cheating.

When Kim refused to name her attacker, Counselor Samantha Copeland, a district attorney, had Kim arrested for child pornography. But this only increased Kim's refusal to cooperate. Detective Benson finally convinced her with the help of Stabler's daughter, Kathleen. When Kim finally identified Steve as the assailant, Copeland was ready to drop the charges, but Marsden charged Kim for child pornography and sentenced her to a year in lockup at Wellsburg, Ohio.

Outraged at this sentencing, Benson and Pond, Kim's attorney, tried to look up Marsden's records, but ended up being locked up. After being released, the SVU found out about Marsden's felony charges in addition to her financial kickbacks from Wellsburg.

With this knowledge, the SVU staged a sting operation on Marsden. Stabler pretended to be the father of a girl whose boyfriend took her on a joyride with his car and totaled it. At court, she charged the boy, (really Ethan Morse in disguise), with grand auto theft and endangering the welfare of a child. With this sentencing, Marsden had exposed herself and was arrested in her own courtroom.

Afterwards, Kim was released and Sam Copeland promised to help release the other children Marsden had sent to the facility.

Hilda Marsden is based on Mark A. Ciavarella Jr. and Michael T. Conahan, who were the judges involved in the Kids for Cash Scandal.