Passing sentences and judgement even as a judge.

Sacrifice her daughter Nora to appease The Order's God (succeeded, but failed to appease God).

Revive The Order cult and to preserve the stability and safety of the town of Shepherd's Glen. (all failed)

Judge Margaret Holloway is the main antagonist in the videogame Silent Hill: Homecoming. She is a local resident of Shepherd's Glen, a town near Silent Hill, and functions as the town's judge.

Margaret is a descendant of one of the four founding families of Shepherd's Glen, who left Silent Hill and its resident cult in the 1850s in order to pursue a new life. Fearing the wrath of their God, the founders made a pact to keep them safe. Every 50 years, a member of each founding family was supposed to sacrifice one of their children themselves. Upon founding the town, each family took on a specific role and method of sacrifice. The Holloway family took up the role of the Keeper of Lore, responsible for maintaining the founders' beliefs. Their sacrificial method was strangulation.

In 2003, the time came for the current generation to make their sacrifices. Believing that the ritual was the only way to protect Shepherd's Glen and her family, Holloway sacrificed her younger daughter Nora, whom she had selected for the purpose years before. Sam Bartlett and Martin Fitch both faithfully carried out their duty as well, but their sacrifices proved to be in vain. Adam Shepherd, the final member of this cabal, had chosen his older son Alex for the sacrifice, which for the Shepherd family meant drowning. However, Josh was accidentally drowned by Alex, who then suffered a complete mental breakdown. Lacking in conviction, Adam wavered from sacrificing Alex and instead had him committed to a mental hospital. This caused Silent Hill's foggy Otherworld to engulf Shepherd's Glen and placing its local citizens in dire jeopardy. Every one of the sacrificers was affected by this event, but Holloway decided to do whatever she deemed necessary to save Shepherd's Glen.

Apparently driven mad by the strange turn of events and the fact that she sacrificed Nora for nothing, Judge Holloway came to the conclusion that the only way to save Shepherd's Glen was to bring them back to the true faith of the Order. She revived the cult, which had been defunct for several years, for this purpose. She recruited Curtis Ackers, Shepherd's Glen's resident handyman to be her second in command. Holloway set up the new cult's base of operations in an abandoned mine underneath the Church of the Holy Way in Silent Hill, which had been used as part of the sacrificial ritual by the founding families. She proceeded with her plan to save her town, and began kidnapping the townsfolk to Silent Hill and brainwashing them into converting. These successful converts were used as Order Soldiers, and they wore distinct miner suits. Others were simply tortured to death, which Holloway believed gave them new life through rebirth. Holloway continued carrying out her plan, until almost the entire town of Shepherd's Glen had either been killed or converted.

4 years later in 2007, Alex Shepherd returned to Shepherd's Glen, apparently after escaping from the mental hospital he was held in. He was suffering from delusions, believing that he had been in the army for the last for years, as well as that Josh was still alive and needed his help. Holloway was the first person to meet him upon his return, and she acted like nothing was wrong at all even if the town was devoid of life. Alex began investigating the town in the search for his brother, and gradually uncovered some of the town's secrets. After this had gone on for a while, Holloway ordered Ackers and squad of Order Soldiers to kidnap Lillian Shepherd, Alex's mother. Alex, Holloway's older daughter Elle, and Wheeler, the local deputy, head to Silent Hill in search of Adam Shepherd, who had gone there to confront the Order. However, another squad of Order Soldiers attacked their boat, kidnapping Elle and Wheeler. Alex escaped and continued into Silent Hill, cutting off the power the Order had supplied to the Overlook Penitentiary, where they were holding Wheeler. Alex raided the prison, where he found Judge Holloway inexplicably restrained in a gas chamber. Alex freed her and ushered her out of the room before confronting Asphyxia, a monster based on the way Nora was sacrificed. When she left the chamber she smirked evilly and closed the door so Asphyxia could kill Alex.

Alex eventually made his way to the Order's lair under the church, where he was captured by Ackers and brought before Judge Holloway.

Ackers restrained him in a chair, so Holloway could do as she pleased. She then ordered Ackers to torture Elle to death as punishement for her disobedience.

As Ackers left the room, Holloway revealed the town's history, the sacrifices, and her own motives for her actions. Determined to finish what Adam Shepherd could not, she began to torture Alex to death by drilling him in the leg.

Holloway met her death when Alex broke out of his restraints and forced the drill up into her head.

Judge Margaret Holloway
Add a photo to this gallery 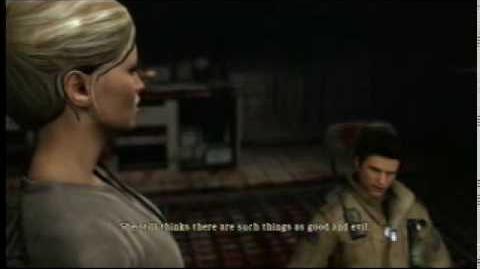 Retrieved from "https://villains.fandom.com/wiki/Judge_Margaret_Holloway?oldid=4276969"
Community content is available under CC-BY-SA unless otherwise noted.