Manipulating the law to suit his own agenda

Abuse (includes psychological and of power)

Judge Turpin, also known as Lord Turpin, is the main antagonist of the 1979 musical Sweeney Todd: The Demon Barber of Fleet Street and the 2007 live-action film of the same name. He is a corrupt judge who ruined the life of Sweeney Todd.

In the film, he was portrayed by the late Alan Rickman, who also played Hans Gruber in Die Hard, Elliot Marston in Quigley Down Under, the Sheriff of Nottingham in Robin Hood: Prince of Thieves, Severus Snape in the Harry Potter movie franchise and Joe in Help! I'm a Fish.

Judge Turpin is an extremely malevolent, cruel, and diabolical man. He is deceitful and manipulative, as he ruined the life of Sweeney Todd by sending him away and later raping his wife. Despite his villainous tendencies, he is also highly elegant, polite, and sophisticated. Destroying Sweeney's life was his fatal weakness which led to his demise at the hands of his enemy.

The Judge is motivated largely by his puritanical devotion to the law, and by his sexual obsession. He is partly aware of his own perversion. In one musical scene, not included in the Tim Burton film, and left out of some theatrical productions, shows a small sympathetic side to him. In this scene, the Judge watches Joanna through a keyhole while whipping himself, trying to purify his thoughts of her. Sondheim admits in his collected lyrics that he implied the judge finds sexual release during this moment. At the end of the song, the Judge decides to marry Joanna, believing she is the only person who can "cure" him from his lust.

Judge Turpin first appeared when he had Benjamin Barker arrested, due to his infatuation with Barker's wife Lucy. He exiles Barker to Australia on false charges. Lucy is heartbroken, and becomes a recluse, never coming down from her home. Judge Turpin continuously pursues her, sending her flowers each day. He sends his right-hand Beadle Bamford to summon her to his home, "blaming himself for her dreadful plight". At his house, during a masque ball, he drugs and rapes Lucy, who tries to kill herself by drinking poison, though she actually survives and is driven insane before being reduced to begging in the street.

Turpin then takes Barker's infant daughter Johanna and raises her as his ward. He keeps her locked away from the world and spies on her through a peephole in her wall. When Johanna turns sixteen, Turpin offers her his hand in marriage. She refuses, to which he seems baffled. When he spots a young sailor named Anthony Hope with Johanna, he threatens to kill him if he ever returns. Turpin is later seen sentencing a child to be hanged for petty crimes.

On Bamford's advice, he goes for a shave at Sweeney Todd's barbershop, in order to impress Johanna. Unbeknownst to Turpin, Todd is in fact Barker, who returned from Australia and is hell-bent on revenge. Todd is about to cut Turpin's throat when he is interrupted by Anthony, who reveals Johanna's plan to escape. Turpin promptly leaves, renouncing Todd's business. Turpin returns home and commits Johanna to an insane asylum, telling the owner Jonas Fogg that she is mad.

Turpin receives a letter claiming that Johanna has repented, and only wants his love. He is delighted, and following the direction of the letter, he goes to Todd's shop, where he is persuaded to have a shave. Todd then reveals his identity before savagely stabbing Turpin in the neck before slitting his throat. He then drops Turpin down the chute. Before he bleeds to death, Turpin grabs at Todd's accomplice Mrs. Lovett when she discovers him lying on her cellar floor.

Despite Turpin's death, Todd is horrified to find out that the beggar woman that he killed previously was his wife Lucy, and that Lovett lied to him about her fate. An enraged Todd kills Lovett by throwing her into the oven before comforting Lucy's body, right before Toby comes out and kills Todd in revenge for Lovett's death. 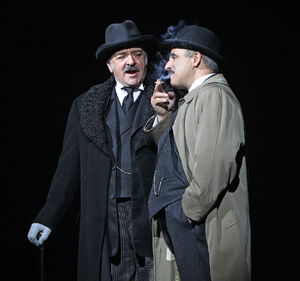 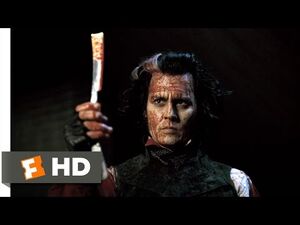