Avenge her son's suicide by killing The Motega Five and anyone that gets in her way (succeeded with everyone, except Dawn).

Judith Berry is a commune member and the main antagonist in the second season of the horror anthology series Slasher. She was the mother of Owen Turnbull, the counselor that The Motega Five framed for Talvinder's death. As a result of this, Owen hanged himself in prison, but not before asking his mom to make the ones responsible pay.

She was portrayed by Leslie Hope. Stunts were potrayed by Bernadette Courture.

Judith was the mother of Owen Turnbull, a counselor for a summer camp in Canada called Camp Motega. However, one night, a group of counselors killed another counselor they were having problems with. Afraid of going to prison, the counselors hid the body and framed Owen by putting a necklace belonging to the deceased, in his laundry basket. He was arrested and charged with murder, but knew the truth. Years later, he wrote a letter to his mother asking for her to avenge him and committed suicide by hanging himself with bed sheets. As a result of her son's suicide, she developed a homicidal and vengeful personality in her head known as Wren.

"Between Good and Evil"

"Out of the Frying Pan"

"Dawn of the Dead"

"The Past is Never Dead" 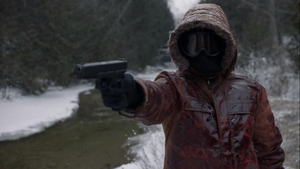 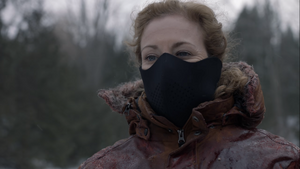 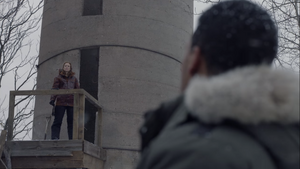 Retrieved from "https://villains.fandom.com/wiki/Judith_Berry?oldid=3602879"
Community content is available under CC-BY-SA unless otherwise noted.