Dr. Judith Fessbeggler (also "Dr. Fessbeggler")
Judy (does not like to be called that)

Judith Fessbeggler is the main antagonist and anti-hero of the 2001 comedy film Saving Silverman. She is a beautiful, yet domineering psychologist.

She was portrayed by Amanda Peet.

Before she became the controlling girlfriend of Darren Silverman and the worst enemy of his two best friends Wayne and J.D., beautiful but totally controlling psychotherapist, Dr. Judith Fessbeggler was into strong-willed and assertive men and was engaged to a certain man named Josh. Together, they went on a vacation. But his idea of their vacation was to compete in a kick-boxing tournament in Thailand. Judith cheered him on. When Josh beat his last opponent and was on the verge of winning the tournament, that opponent in his anger, did not back down. He uses a swift kick on Josh and knocked him down. Judith watched and cried as her fiance was declared dead at the end of the match. After that, Judith decided that she no longer love tough guys.

Few years later, Judith met Darren through a chance encounter in a local bar after his friends' band gig since the trio of best pals and Niel Diamond fans have called themselves "Diamonds in the Rough". Darren while being pushed by his two pals to meet her, suddenly became her new boyfriend when Judith says to an amateur magician at the bar, "This is my boyfriend Darren. So hit the pricks, Porky". The man whose feelings now utterly hurt, replies with a farewell "Nice to meet you, Darren... Satan".

Unfortunately, 6 weeks into their relationship, Judith is still making Darren watch her change clothes, and though sleeping together is satisfying for her, Darren gets nothing but a sore jaw. Judith isolates Darren from his friends, demands that Darren quit the band, receive humiliating medical procedures, and attend relationship counseling under her care. Even worse to Wayne and J.D.'s surprise, Judith made Darren burn all his Neil Diamond albums.

Wayne and J.D. decide to save Silverman from her by attempting to bribe her, arm wrestle her, and shock her with faked photographs of Darren cheating, all to no avail. To Judith, the two fools are only prolonging the inevitable. The friends, undaunted, try to reunite Darren with his "one and only", Sandy Perkus, when she returns to Seattle to take her final vows as a nun. When Darren and Judith announce their engagement, Wayne and J.D. kidnap Judith. J.D. in his bird mascot suit, was about to leave the imprisoned Judith after he gave her food when she suddenly said "See ya later J.D." and he replied "Take it easy, Judith--" and realized she easily tricked him into revealing the identity of her kidnappers. When they visit Coach Norton in jail, his advice is that they should just kill her However they couldn't and would not kill her because Judith was right thanks to her psychological know-how. Chained to an engine block in J.D.'s basement, Judith convinces J.D. he is gay using her psychological know-how and a fake therapy she gave J.D. as well. She knocks him unconscious to steal his keys and escape, only to be tranquilized with a dart gun by Wayne. Returned to the basement, Judith seduces Wayne into releasing one of her hands, so she, after beating both Coach Norton and Wayne, escapes again. She runs to Darren's house in time to see him kiss Sandy, but shames him into confessing his engagement to Judith. Sandy, disheartened, returns to the convent again. Darren has Wayne and J.D. arrested after he beat them up and tossed them at poor Sandy's car, but it also was all at the delightful joy of Judith. After escaping from jail with the help of Coach Norton, J.D. and Wayne rush to the convent on the brink of Sandy's final vows as a nun. They convince her that Darren still loves her. They then kidnap the famous Neil Diamond who is to help Darren and Sandy reunite. At the wedding, Neil stalls the proceedings with song while Sandy arrives to stop the wedding and rescued Darren who then made the right choice to be with her instead of Judith because she was his one and only someone. As Wayne arrives, he and Judith beat each other up (as love play) then finally kissed each other because they were in love, Darren and Sandy reunite, and J.D. arrives holding Coach in his arms, and come out as gay to each other.

On stage at the Neil Diamond concert that night, the priest weds Darren to Sandy, Wayne to Judith, and J.D. to Coach; the entire cast sings "Holly Holy" and lived happily ever after. 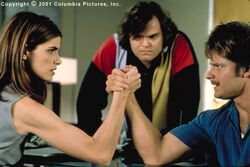 Wayne challenged Judith to an arm wrestle but she was too smart and too strong for him. 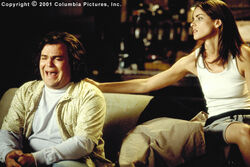 Judith with this fake therapy, easily tricked J.D. into realizing that he was gay, and escaped. 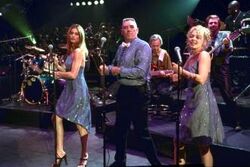 Judith, now with a change of heart and married to Wayne, sings and dances with both Sandy and the newly-gay Coach Norton.
Add a photo to this gallery
Retrieved from "https://villains.fandom.com/wiki/Judith_Fessbeggler?oldid=2812232"
Community content is available under CC-BY-SA unless otherwise noted.