Kill Peacemaker and his team (both failed).

Judomaster is a major antagonist in the DC Extended Universe series Peacemaker. He is a highly skilled and dangerous martial artist and the former bodyguard to Senator Royland Goff.

He is portrayed by Nhut Le.

Judomaster was hired by Senator Royland Goff to act as his bodyguard and protect the Butterfly secrets. Judomaster was aware that Goff and his family were all Butterflies, but he chosen to protect them the same.

When Peacemaker and his team killed Goff's family and attempted to kill him, Judomaster intervened. He took out Harcourt, Peacemaker, and Vigilante in a fight, later dragging Peacemaker and Vigilante to Goff's hideout, where he mocked Smith and threw cheetos at him. He was later seen leaving Goff's mansion and driving in a car but was crashed into and knocked out by John Economos.

Eventually Judomaster woke and managed to break free but instead of running away he stayed in the building so that he could take vengance on Economos for running him over with a van, badly injuring him.

Peacemaker then tried to find Judomaster, goading him into a rematch which Judomaster accepted. During the fight Judomaster attempted to warn Peacemaker about the Butterflies but before he could say anymore, he's shot by Leota Adebayo. Judomaster was taken again and attended to by Economos in order to keep him alive.

Anyway Judomaster managed to break free again and, after beating up two guys outside a convenience store for taunt him for his size, he stoles their car to drive to Adebayo's apartment.

Once arriving at Adebayo's apartment, he immediately attacked Harcourt and in the process renders Adebayo unconscious. Judomaster and Harcourt battled for a while, when he was about to kill Harcourt Adebayo tasers Judomaster repeated until he fell unconscious.

Judomaster is a very aggresive person, he is quick to pick fights and attack anyone he deems to be an enemy regardless if they can defend themselves or not. He's generally quiet and he will talk just for insulting.

Judomaster is also petty and vindictive as shown him mocking Peacemaker hitting him with cheetos, which he eats when bored, often attacking him and his team and brutally beating up two guys outside a convenience store after they taunt him. 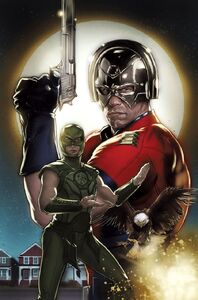 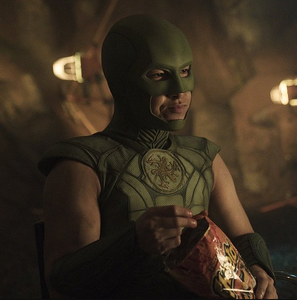 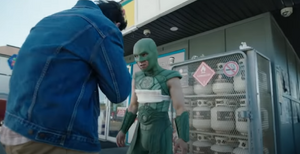 Judomaster at the Store