Avatar of Cyttorak granting him:

Inflicting violence and destruction whenever possible.

Stealing Money.
Interacting with Black Tom.
Gloating over his own strength.

Cause chaos in any way as he can.

Kill Charles Xavier/Professor X, the X-Men, Spider-Man and any other superhero he comes into conflict with.
Become rich through criminal acts.

Juggernaut (real name: Cain Marko) is a long-running character in the X-Men franchise and has varied over the years from a villain to an antihero and even a full-on hero - though he seems best known for his beginnings as a thug and mystical-warrior bond to the service of the god-demon known as Cyttorak. He was later stripped of his position and the role of Juggernaut was been passed down to Piotr Rasputin (also known as Colossus). Following the Avengers vs. X-Men event with Colossus now stripped of his position, the position of the Juggernaut was vacant until Cain regained his powers during the Amazing X-Men series.

In the 2006 live action film X-Men: The Last Stand, Juggernaut appeared as a supporting antagonist and was portrayed by Vinnie Jones.

Cain Marko is the stepbrother of Charles Xavier and always resented his stepbrother due to the fact his father often abused him and seemed to favor Xavier - this resentment led to Marko developing a bullying nature which he never really grew out of and he made Xavier's life as difficult as possible from an early age.

Birth of a Juggernaut

Later in the 1960s Marko and Xavier were stationed in Korea, serving in the army - during this period Marko stumbled across a hidden temple dedicated to Cyttorak, Marko entered the temple and found the mystical ruby known as the Gem of Cyttorak and read the gem's inscription aloud (which was: "Whosoever touches this gem shall be granted the power of the Crimson Bands of Cyttorak! Henceforth, you who read these words, shall become ... forevermore ... a human juggernaut!")

The gem proceeded to transform Marko into the Juggernaut but caused a cave-in in the process, apparently burying him alive, and leaving Xavier to believe that his stepbrother was dead.

Rise and Fall of The Juggernaut

As the Juggernaut Marko managed to escape after a long period of time and instantly tracked down Xavier, attacking the X-Mansion and battling the X-Men. The Juggernaut proved powerful enough for Xavier to call on the aid of the Human Torch as well - during this battle Juggernaut is defeated by Angel, who removes his helmet and exposes him to Xavier's telepathy, forcing Marko to flee.

However, Marko would soon return, seeking revenge and had to be delayed by three X-Men while Cyclops, Marvel Girl and Dr. Strange worked together to find another Gem of Cyttorak in order to banish Marko to the Crimson Cosmos, the home-dimension of Cyttorak. This proved a costly mistake on Dr. Strange's part as Juggernaut soon returned even more powerful and fought against the sorcerer until he was cast into an alternate universe by Eternity itself.

Return of a Juggernaut

Yet it seems even Eternity's drastic actions were insufficient and Marko returned to Earth through sheer force of will some time later - though the dimension he had been banished to had caused him to age rapidly, and in his panic, he attacked the Beast before being drawn back into the alternate dimension.

The Juggernaut would reappar again on Earth when dimensional-experiments designed to get rid of the Hulk backfired - the Juggernaut would then have a brief alliance with the Hulk to escape the base but got into a fight when the Hulk objected to Marko threatening an innocent civilian, during this battle Marko was ambushed by Xavier, Cyclops, and Marvel Girl and was defeated once more.

However, the Juggernaut was never one for giving up and he soon resurfaced with Black Tom Cassidy, a mutant criminal who would soon become one of Marko's closest friends. Together they battled the new X-Men but suffered defeat - with Juggernaut retreating and Black Tom seemingly falling to his death after a sword-duel with his cousin (Banshee).

Juggernaut would return, alongside a very much alive Black Tom, to terrorise Spider-Woman and the X-Men during a plan by Tom to manipulate Banshee's daughter (Siryn) into stealing a shipment of vibranium. Once again, Marko is forced to flee when Black Tom is arrested and Siryn is put under the care of her father.

Juggernaut's friendship with Black Tom didn't end however, and no sooner had Black Tom escaped from prison than he had Marko hunt down Madame Web, a psychic he felt could be a useful ally. Juggernaut destroyed several city blocks in his quest and ignored the futile attempts by Spider-Man to stop him, however Juggernaut nearly kills Madam Web when he remobves her life-support device and decides to abandon her. By this time Spider-Man was frustated enough to lure Juggernaut into a trap and the villain ends up sinking into setting concrete without a trace.

The Juggernaut, as per usual, managed to escape his prison however and soon began getting involved in several exploits such as a bar fight with Colossus (in civilian guise), another battle with Spider-Man (this time aided by the X-Men), suffering a horrible defeat at the hands of Nimrod - the ultimate Sentinel and becoming one of the many villains assembled to take on the omnipotent being known as the Beyonder. During this time-period Marko all battled the new generation of X-Men and has a comedic encounter with Captain Britain.

Marko continues to be a popular character in Marvel and has been a villain, anti-hero and even a fully redeemed hero over the course of the "modern era" - during his time in New Excalibur he was a full-on hero but soon began to show signs of falling back into his criminal past and by the time the World War Hulk storyarc gets into play he has returned to villainy - declaring that redemption, at least in his eyes, is now impossible.

After Cyttorak took away the power from Cain during the Fear Itself storyline for his betrayal when Cain became Kuurth, an Avatar for the Serpant, originally the role of Juggernaut was to be been passed down to the X-Man Magik, but her brother Colossus took the role of Cyttorak's avatar instead and can transform into Juggernaut's armor at will. Despite now possessing Juggernaut's power and using it for heroic purposes, Colossus suffers from mental instability when he uses that power and has to keep himself in check.

Following the Avengers vs. X-Men event the Juggernaut's powers were purged from Colossus by Magik. Eventually Cain was able to reclaim his powers as the Juggernaut.

When Cain Marko finds the Gem of the mystical entity Cyttorak, he is empowered with magical energies and transformed into an immortal avatar for the entity in question. As the Juggernaut, Marko possesses superhuman strength (can lift more than 1000 tons), being capable of shattering mountains, lifting and using buildings as bludgeoning weapons, and extreme durability.

Juggernaut is able to generate a mystical force field that grants him additional invulnerability to any physical and energetic attack when it is at its maximum, it was even capable to resist Thor's God Blast. Even when the force field is temporarily absorbed by Thor's hammer Mjolnir, the Juggernaut's natural durability still proves to be great enough to withstand punches from Thor for a while. The Juggernaut is described as physically unstoppable once in motion, does not tire from physical activity, and is able to survive without food, water, or oxygen for months. The Juggernaut heals quickly, as when he was stabbed through the eyes by Shatterstar, the wounds were healed almost immediately.

When Marko gained complete access to the Gem's powers during the Trion saga, it increased his power a hundredfold. Trion Juggernaut is capable of altering the size of matter, growing in size up to 100 feet, tracking, levitation, absorbing and projecting energy blasts, increasing his own strength to unknown limits, and creating portals through space-time with his punches.

It is possible for an opponent with sufficient physical or mystical strength of their own to turn the Juggernaut's unstoppable movement against him, by redirecting his motion so that he gets stranded in a position in which he has no escape; both the Hulk and his son, Skaar, have done this physically, and Thor has done it mystically with Mjolnir. The only characters to have stopped Juggernaut while he was in motion as an act of pure physical strength was the Hulk while he was War, a horseman of Apocalypse and empowered with Celestial technology and the monstruos entity Onslaught.

The character is vulnerable to mental attacks, a weakness that has been exploited via the removal of his helmet, which normally protects him from such. The Juggernaut has circumvented this weakness on occasion by wearing a metal skullcap inside his main helmet. If Juggernaut loses his helmet, he can magically recreate it from available raw materials (assuming he possesses the full power of the gem that is).

A different kind of Juggernaut appears in the live-action movie X-Men 3, he is neither mystical nor particularly unstoppable - though he is immensely durable and strong. In the film he fights against Kitty Pride and is nowhere near as formidable as the comic-book or animated-versions of Juggernaut. It is also worth noting this Juggernaut is a mutant rather than a magic-user due to both this and his costume are based off Marvel's Ultimate X-Men comic book series and has no relation to Charles Xavier.

The Juggernaut was a playable character who was on the X-Men side and was a minor villain. He was the biggest character in the game, making him easy to combo and punish. His rival/partner was another hulk just like him, Zangief.

Juggernaut is also the main focus of the novel X-Men: The Jewels Of Cyttorak and also appears in X-Men: Mutant Empire where he is allied with his traditional enemies the X-Men against Magneto, who is intent on conquering Manhattan - both novels were released in 1997. 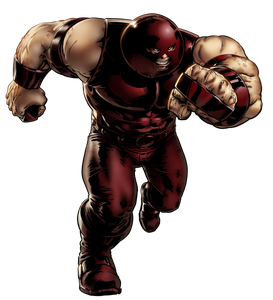 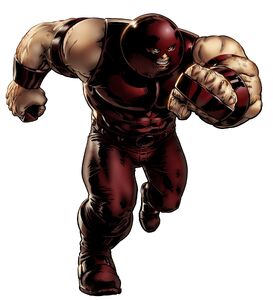 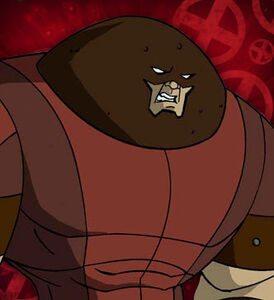 Juggernaut in Wolverine & the X-Men. 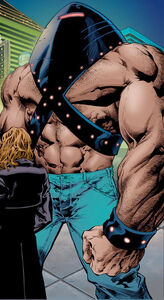 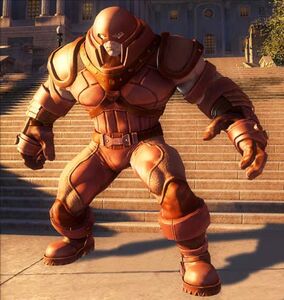 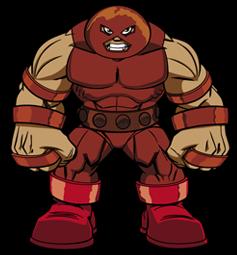 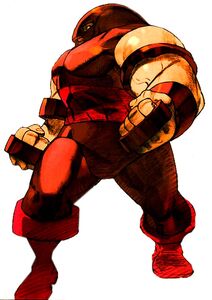 Juggernaut in Marvel vs. Capcom 2. 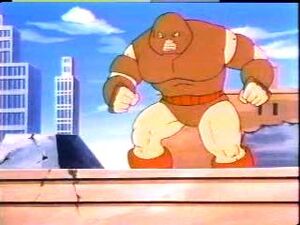 Juggernaut in Spider-Man and his Amazing Friends. 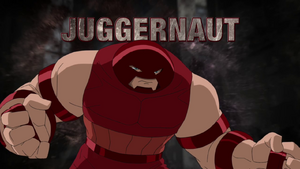 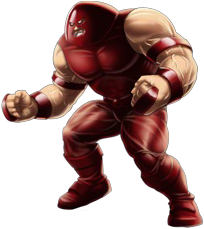 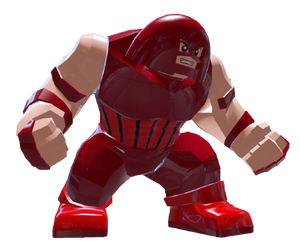 A Lego version of Juggernaut. 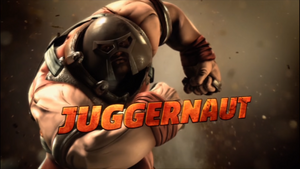 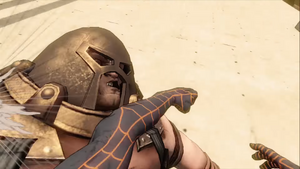 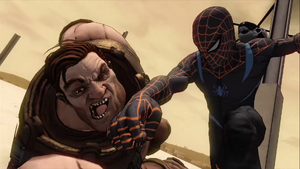 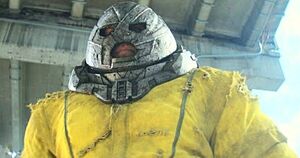 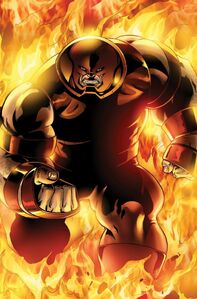 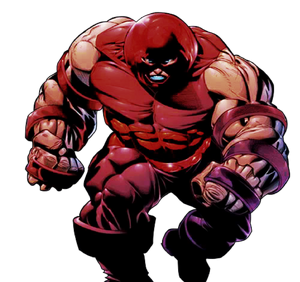 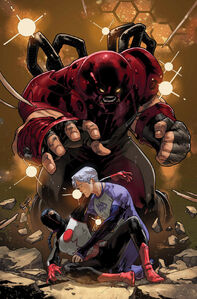 Retrieved from "https://villains.fandom.com/wiki/Juggernaut?oldid=3482400"
Community content is available under CC-BY-SA unless otherwise noted.