Jujudormah, also called "JujuRan", is a major antagonist and a boss in Onimusha 2: Samurai's Destiny. She is a high-ranking member of the Genma Demon Clan who fights with an umbrella and a purse with a blade attached to it. Although she thinks she is beautiful and is very vain, she is fat and hideous. She is also a playable character in Onimusha: Blade Warriors. She has a rivalry with fellow Genma Ginghamphatts.

Little is known about Jujudormah's past. It is revealed in Onimusha: Blade Warriors, that Jujudormah used to be very beautiful in her youth. She used to use her beauty to seduce men and then kill them (presumably for food). She also fought with her umbrella and a short sword. She is also shown to have a strong disdain for other women, saying that all other women can "Go to Hell".

In the second Onimusha game, Jujudormah is revealed to be a hideous, short, and stocky demon woman. When the protagonist, Jubei, meets her for the first time, she reveals to him that she is going to his village to kill his mother. Jubei gives chase but is too late.

Later, Jubei meets Jujudormah in her bedroom. Jujudormah starts to try and seduce him, but Jubei, still vengeful about his mother, insults her, calling her a "nasty thing". Jujudormah and Jubei fight to the death, with Jubei emerging victorious and avenging his mother. 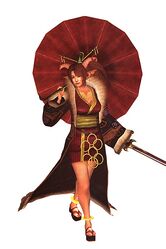 JujuRan
Add a photo to this gallery
Retrieved from "https://villains.fandom.com/wiki/Jujudormah?oldid=3851040"
Community content is available under CC-BY-SA unless otherwise noted.