Julia Veloso is the secondary antagonist from "Corner Office", episode 17.10 of Law & Order.

She was portrayed by Mercedes Renard.

Julia Veloso is a high-class escort and the lover of CEO Samantha Weaver. She quit her profession once she began dating Samantha, but their relationship was threatened when Charlie Dillon, a lawyer for Halligan-Webb, blackmailed Samantha regarding her dating Julia. Under Samantha's orders, the evil Julia seduced Dillon and later killed him, doing so by shooting him to death with a gun that Samantha received in Houston in 1999. During her interview with Detectives Cassaday and Green, Julia kept her murderous role hidden, as well as her relationship with Samantha. After everything was revealed, though, Julia ended up arrested and charged with killing Dillon. 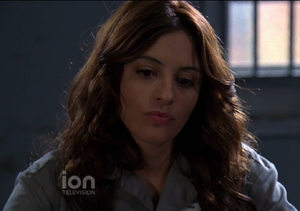 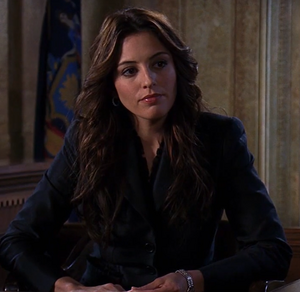