Julian Assange is the protagonist of the 2013 biographical thriller film The Fifth Estate. He is based off of the real Julian Assange, the founder of WikiLeaks.

He was portrayed by Benedict Cumberbatch, who also played Khan Noonien Singh in Star Trek into Darkness, Smaug and Sauron in the Hobbit, The Grinch in The Grinch, and Dormammu in Doctor Strange.

Back then in 2007, he and the German journalist, Daniel Domscheit-Berg, met at the Chaos Communication Congress, where they begin to work on the website, WikiLeaks, together. They used the website to reveal an employer at the Julius Baer bank as a fraud, accused of stealing money. Ever since then, WikiLeaks was founded with Julian as its founder and Daniel as his colleague, who both of them hoped to improve the world.

At the beginning, Assange is seen as a noble mentor by Daniel. However, the relationship between the two grows strained over time. Also, some problems arise in the company as in 2010, Daniel became concerned about WikiLeaks, containing government secrets and people's personal information. Julian mocks Daniel's preoccupations about the issues. Assange becomes more and more rude. For example, he leaves Daniel at his parents' house after accepting their dinner invitation, only adding to the tension. Throughout the film, flashbacks hint at Assange's troubled childhood and involvement in a mysterious cult, and that Assange's obsession with WikiLeaks comes from his childhood trauma rather than a desire to better the world. Assange also constantly tells incoherents stories about why his hair is white. About WikiLeaks, Assange tells Daniel that WikiLeaks has hundreds of employees, but Daniel later finds out that it is a lie, as the two are the only members. Assange also frequently claims that source protection is the website's main goal. However, Daniel begins to suspect that Assange only cares about source protection and not about who is hurt by the website, although Assange claims the harm that the website can cause is outweighed by the good that the leaks create.

The peak of the tension comes when thousands of secrets documents including a video about the famous Baghdad airstrikes are leaked. Assange wants to release the documents immediately, but Daniel insists on a more careful approach of reviewing the documents first. Later, Daniel and some newspapers interested by the work demand that the names in the documents be redacted both to protect sources and to help with media coverage, to which Assange reluctantly agrees. But Assange has no intention of keeping this promise and prepares a right-hand man to replace Daniel. Newspapers publish the redacted documents. The resulting media and public outcry forces informants to exile themselves out of fear of being arrested. Before Assange can put his plan into action, however, Daniel and the other members of the original WikiLeaks team remove the site and block Assange's access to the server.

Daniel later talks to a reporter from The Guardian, and the two fear that giving Assange such an important platform was not a good move. The reporter tells Daniel that while Assange may not be trustworthy, he was right in uncovering hidden dealings made by governments and that trying to protect the sources was a good thing. It is also revealed the real reason for Assange's hair color is because of a tradition in the cult he was involved in his youth. 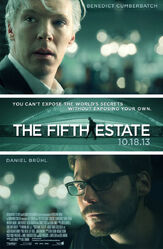 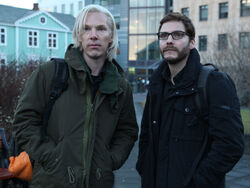 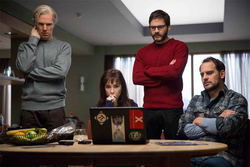 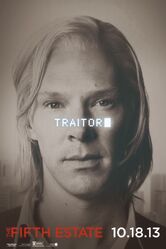