Captain of the Miami Vice Division

Televising himself in the office at his mansion.

Kill Nicholas Mendoza and his allies.
Keep his own network being so successful but top secret (both failed).

Captain Julian Dawes is the main antagonist of the 2015 videogame Battlefield Hardline. He is the head of the Vice division of the police department in Miami, Florida and the former supervisor of Nicholas Mendoza and Khai Minh Dao. It's later revealed that he's a corrupt official heading a criminal network, and incriminates Mendoza to prevent the latter from exposing his deals.

He was voiced by Benito Martinez, who also played David Aceveda in The Shield and Edgar in Supernatural, and also voiced Manuel Noriega in Call of Duty: Black Ops II and Khamsin in Metal Gear Revengeance.

Describing his father as being a "shithead dad" during his childhood, Dawes went on the join Law Enforcement where he spent the rest of his life as an officer, eventually receiving the rank of Captain in the Miami Vice division. Case files reveal that Dawes had once been married at some point but his wife later died from cancer, devastating Dawes and turning him to a life of crime. During his years as a Captain, Dawes became the leader of a network of corrupted policemen, mercenaries, and military contractors, attracting the attention of Sergeant Carl Stoddard who became his right hand man who would go various dealings.

After an incident with a drug bust, Captain Dawes partners Nick Mendoza with Detective Khai Minh Dao and warned Sergeant Stoddard that he would be on special detail.

Later, while trying to arrest drug dealer Remy Neltz and interrogate him about a deal he mentioned to have made with Stoddard, who then in and fatally shoots Neltz, shocking Mendoza. Stoddard offers to bribe Dao and Mendoza, but a disgusted Mendoza angrily leaves the scene. Mendoza proceeded to inform Dawes of Stoddard's corruption as well as Dao accepting the bribe, only to find that it had been a test for Mendoza. They told him that they had to be sure of whether or not they could trust him and that they needed Mendoza's help in taking down Stoddard by collecting enough evidence linking him to Neltz to take to Internal Affairs.

Mendoza managed to find the evidence as well as arresting Stoddard in the process and presented the evidence to Dawes, who then shockingly destroys it, revealing that Stoddard had been working for him. Dawes, Stoddard, and Dao then explain to Mendoza that they had tried to bring him on their side but in the end, Nick failed their test by not taking the money. As a result, they framed Mendoza for stealing the last funds which Neltz was trying to transfer and he is arrested and sent to prison.

Three years later, Dawes had created a private police organization, Preferred Outcomes, with the ultimate goal of eventually police conventional police forces around the entire country in order to allow him to take total control. At that time, his plan had been successful in Miami as he was able to negotiate with crime lords to form truces with one another and to pay him for protection from the law. Dawes soon sought to expand to the west to Los Angeles, prompting a recently betrayed Khai Dao to enlist the help of Tap Milstein and Tyson Latchford in breaking Nick Mendoza out of prison during a prison transport ride.

From that point on, Mendoza, Tyson, Khai and Marcus Boone gather Intel on Dawes intention to expand his empire and seek slowly sabotage it through the destruction of property and the killing of partners, such as Stoddard himself. Shortly before Stoddard's death, Dawes texted Stoddard on his phone asking for an update of whether or not Nick Mendoza and his partners had been taken care of, prompting Nick to snap a picture of Stoddard's dead body and send it to Dawes.

Knowing that Mendoza would soon come to his penthouse in Miami in order to steal all of his fortune to ruin him, Dawes proceed to move all of it out of his safe and plant explosives in the event they were successful in cracking the vault. Thanks to the Brute, the vault was successfully cracked, prompting Tyson Latchford to open the vault first, revealing the explosives and heavy injuring him. Observing the entire event through a camera in the vault, Dawes called Mendoza on a phone that had been purposely left in the vault. Knowing fully well that Nick would never stop at hunting him, Dawes told him that he was on Santa Rosata Island off the coast so that he could meet him there to finally end it.

Upon reaching the island, Nick subdued two guards and stole a radio, revealed to Dawes who had been asking for an update that he was on the island and was coming to confront him. Dismissing this claim, Dawes proceeded to continually taunt Mendoza as he closed in on Dawes location. With Nick now holding Dawes at gun point, Dawes states that both of them are alike in many ways and mentions Stoddard's death as an example of how ruthless he is. Dawes then offers him a job as his new right-hand man in his organization and to take his place once he is gone. He goes on to say that Nick is "more criminal than cop", only for Mendoza to reply that he thinks that Dawes is right before fatally shooting him in the chest. A dying Dawes then mockingly asks Mendoza how his mother is doing, knowing full well that she had died while Nick had been in prison. Nick proceeds to shoot a laughing Dawes twice in the head, killing him.

Afterwards, Nick discovers a letter addressed to him on Dawes' desk, revealing that Dawes had expected to be killed by Nick. The letter goes on to say that senior police officers had no problem with following his plans but because he knew Nick would not look the other way, he took it upon himself to remove Nick from the picture by framing him and subsequently ruining his life. Surprisingly, the letter reveals a secret passage in the nearby bookshelf leading to Dawes' vault which contained the entire fortune for his entire operation. Dawes closes the letter by telling Nick that his organization is now his and asks him what he will do with his newfound fortune.

A cop in the Miami police department, Dawes is known for picking young cops out of the ranks and shaping them into star detectives. Blessed with a politician's charisma and a forensic scientist's eye, Dawes is clearly grooming himself for the top brass.

In the game, he is trustworthy, forensic, honorable, intelligent but stern Captain in Vice. Going by the book persona, he is trustful and caring to his employees such as Mendoza (mentioning his father, telling Nick of his father's way). He also keeps close eyes on cops, such as keeping eyes on Stoddard in the drug bust gone array and Khai's temper issues.

He is also deemed a realist, explaining his view of the world, and man's ruthless nature.

That being said, once it's revealed he is the leader of a corrupt network, he is menacing, cunning, persuasive, manipulative and controlling. He cares for Miami, but shows greediness upon keeping money, and hiring military contractors in secrecy. His nature also only causes personal business with former detectives. This is all caused by his wife's death, causing him to become more of a criminal mastermind than a cop.

Dawes and Mendoza's relationship is shown to be at first trustful, but turns into a personal and unsettled business. Mendoza's hatred for Dawes relies on being sent to prison, losing his reputation, and his mother's death during his absence (making it personal). But Dawes (after seeing Nick's "new personality") gives him a chance to take his place, telling us he sees Nick as "himself" - More criminal than cop. 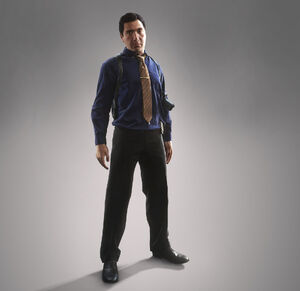 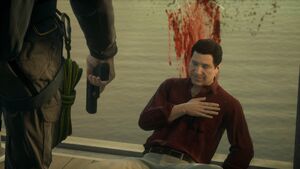 Dawes wounded, moments before his death. 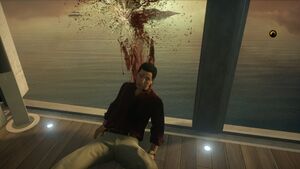