Take Over Nygma's Project for the profit

Julie is the main antagonist of The Batman episode "The Riddler's Revenge". In this incarnation, she was directly responsible for Edward Nygma's transformation into the Riddler.

After a ship explosion caused by a corrupt businessman, Gorman, Batman and The Riddler were trapped in a crate underwater. The Riddler then decides to share his biography and mentions his killjoy father before introducing Julie, who is helping Nygma create a device to improve the human mind. They were approached by Gorman who offered to buy the rights to the project they were working on, only for Nygma to get physical and utterly refuse. When Julie asked why Nygma would do that, Nygma told Julie about his father and all the other people trying to stop him from achieving his goals and she pretended to sympathize with him. When Nygma was demonstrating his device to the professor of his institute something went wrong and it knocked him unconscious, jeaporadizing Nygma's reputation. Realized that the device was tampered with, Nygma instantly blamed Gorman and rewired the man's house into a dangerous trap house and nearly killed him before Batman intervened. Riddler then ended the flashback as Batman had figured a way out of the crate and saved them both.

By Batman pointing out a glaringly obvious fact, Riddler figured out that Gorman couldn't have been the one who rigged the demonstration because he was a businessman, not a scientist, leaving Julie as the only other suspect. Nygma then knocked Batman unconscious and went to confront Julie, who admitted to sabotaging the device because Nygma was a psychopath who would have hindered success for the sake of his own ego and that she was motivated to profit off of the project. Nygma then tried to kill Julie with the same device, but Batman arrived in time to save her, knocking the Riddler unconscious. Robin moved to free Julie from the chair Nygma had tied her to, only to be stopped by Batman, whoriddled Robin "When is the villain... not the villain?". Julie then noticed Nygma shed a tear from a broken heart, leaving her to hang her head in shame with the realization that she had betrayed and ruined the life of a man she ahd once cared about and respected, a man who had loved her.

It is assumed that Julie was taken into custody for originally framing Nygma and endangering their old professor's life with the device she'd tampered with. 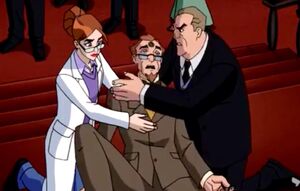 Retrieved from "https://villains.fandom.com/wiki/Julie_(DC)?oldid=3827426"
Community content is available under CC-BY-SA unless otherwise noted.