Villains Wiki
Register
Don't have an account?
Sign In
Advertisement
in: Obsessed, In Love, Related to Hero,
and 27 more

Sacrifice one thousand souls in order to resurrect her late husband.

She is voiced by Laetitia Lefebvre.

Thousands of years ago, Julith led her army in a war against the city of Bonta in hopes of destroying it. However, Jahash Jürgen, guardian of the Ivory Dofus and leader of Bonta's army, fought back against her. After 69 days of battle with no clear outcome, Julith and Jahash fell in love and kissed, an action that struck the soldiers of both cities in awe. The two were wed and peace was made between Bonta and Brakmar. But the aforementioned peace was not to last, for Julith secretly still burned with the desire to see Bonta fall. Because of that very desire, she broke the sacred bonds of marriage by unleashing the dark power of her Ebony Dofus. Knowing how terrible a price the city would be forced to pay for his wife's actions, Jahash entrusted their baby son Joris to retired adventurer Kerub Crepin and saved Bonta at the cost of his own life, the Ivory Dofus being lost and the dragon's soul within the Ebony Dofus escaping into Joris' infant body.

Ten years later, at a ceremony honouring the anniversary of Jahash's noble sacrifice being held at the Palace of Bonta, Julith reveals herself to the crowd by congratulating the artist responsible for the statue of her husband. The King of Bonta ordered his guards to seize Julith, who calmly smiles and unleashes her dark magic to attack the guards. Flying up to the king's throne, she kicks him down to the ground below and steals the damaged Ebony Dofus atop the statue. Julith then hovers high above the city and attempts to unleash her Dofus' power.

Battle with and death of Kerub Crepin

Julith finds her way to Kerub's magic weapon shop and forces her way in by ripping the door open with her cape. Not knowing Joris is hidden inside the shop, she reveals the Ebony Dofus to Kerub and Bakara. Bakara immediately takes action and attacks Julith only to be restrained by the evil sorceress. After exchanging a few cruel words with

Bakara, Julith slams her sister-in-law against the wall, knocking her unconscious. Kerub then dons an ancient suit of gold armour and wields giant nunchucks (which he reveals to have used against Julith at some time in the past). Julith absorbs the Ebony Dofus into her cape and engages Kerub. Sensing Grougalorasalar's presence, Julith blasts deadly shadow energy at Joris and Lilotte's hiding place, only for Kerub to shield them with his body, mortally wounding himself in the process. When Joris runs to Kerub's side, Julith uses the Ebony Dofus to absorb Grougalorasalar out of his body. After hearing Lilotte call out Joris' name, Julith suddenly stops absorbing Grougalorasalar and starts to recognise Joris as her son. Before she can touch him, Bakara distracts her long enough for the dying Kerub to escape with Joris, Bakara and Khan Karkass. A violently enraged Julith burns the shop and takes a trumatised Lilotte prisoner.

Julith returns to Brakmar and hires Kerub's brother, Atcham Crepin, to go to the Ecaflip Dimension and bring Joris back to her alive. After giving Atcham Lilotte's bell and telling him to tell Joris that Lilotte will die unless he returns, she flies back to Bonta to begin preparations. Joris, Bakara, Khan and Atcham return from the Ecaflip Dimension and land in a lush, green forest where Julith is waiting. When Joris angrily demands to know Lilotte's current location, Julith opens her long cape to reveal the frightened Ouginak trapped within it. She releases Lilotte and asks Joris to come with her, but ends up getting attacked by Bakara, who steals the Ivory Dofus from Joris and vows to kill Julith herself and avenge Jahash. Julith attempts to reason with her corrupted sister-in-law by explaining her plans to resurrect Jahash, but Bakara refuses to believe her and continues her violent onslaught. Julith manages to defeat Bakara by overpowering her with the Ebony Dofus and steals the Ivory Dofus and uses it to hurl Bakara to the ground. After witnessing the death of Atcham, who used his body to shield Joris from her attack, Julith embraces her son and flies away, leaving Lilotte and Bakara behind.

Julith and Joris arrive in the sewers directly under the Great Bonta Stadium where Julith's zombies have been constructing a giant light bulb mechanism which Julith plans to use to bring Jahash back to life. Inside the mechanism is a pair of woolly underwear which Julith knitted for her husband when she was pregnant with Joris.

Julith is a cold and heartless woman who does not hesitate to strike down any who oppose her nor can she tell the difference between saving lives and destroying them. However, she does love her husband Jahash and her son Joris the way any wife and mother should. She also displays a keen interest in architecture when she describes her husband's statue as "quite faithful". 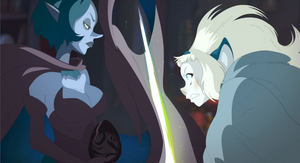 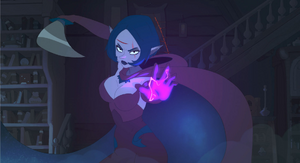 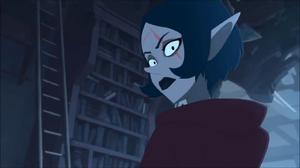