Prince of Darkness (in Japanese version)

Prince of the Grannvale Empire

Destroy Sepliph and his Libration Army
Kill Julia (Under Louptus' influence, all failed)

Julius, also known as the Scion of Darkness or the Prince of Darkness (in Japanese version), is the secondary antagonist and final boss of Fire Emblem: Genealogy of the Holy War, and a supporting antagonist in its interquel, Fire Emblem: Thracia 776.

Julius is the Prince of the Grannvale Empire and serves as Bishop Manfory's "chosen" for Louptus' host, being the final antagonist in the second generation term and the entire game, as well as Seliph's archenemy.

Julius is the son of Arvis and Deirdre, who were deliberately brought together by Manfroy in order to ensure that they would deliver the reincarnation of Loptous as their offspring. Originally, he was a caring and loving borther to Julia, but Manfroy's machination upon him changed him into a heartless and cruel person after being possessed by the tome of Loptus.

Under Manfroy's and Loptous' influence, Julius started to destroy the bloodline of Helm, including killing his own mother and hunting down his twin sister Julia. He also plotted the infamous Child Hunt alongside Queen Hilda to capture children, making them brainwashed servants to Loptous.

Eventually, after the deaths of Hilda and Manfroy, Julius set out for his last stand in Belhalla alongside his twelve Deadlords, to face off against the Liberation Army led by his half-brother Seliph. However, as the war progressed, Julius eventually succumbed to the possession of Loptous as the latter's tome completely took control over Julius' body and mind. After the final battle, Julius was slain, causing the tome of Loptous dissipated into nothingness, but not long after the latter uttered his final vow in Julius' voice.

If Seliph deals the finishing blow, Loptous would uttered his last words in Julius' voice, warning Seliph that he (Loptous) will return so long as humans are controlled by greed. If Julia killed Julius, Loptous would angrily curse Naga for defeating him again. If any other unit dealt the finishing blow, Julius would simply screamed as he fell down dead alongside Louptous.

More of Julius' caring and protective side would be explored in Fire Emblem: Thracia 776, which happened between the First and Second Generations of Fire Emblem: Genealogy of the Holy War. He appeared to genuinely be in love with Ishtar, and had been shown to express jealousy towards other male individuals getting close to her, particularly commented how he despised Reinhardt and the manner in which he gazed upon Ishtar.

Julius appears in Fire Emblem Awakening as an SpotPass character.

Julius is a playabla character in the gacha mobile game, Fire Emblem Heroes. He was added on May 14, 2018 as an grand hero battle.

Julius appears in Super Smash Bros. Ultimate as one of the game's numerous spirits. A novice-level neutral-type spirit, Julius' spirit gives the player stronger fire-based attacks when used. Julius' spirit battle has the player face off against a Robin in a stamina match on the Battlefield variant of the Castle Siege stage, with some parts of the stage being covered in lava and the enemy Robin having stronger fire-based attacks.

Julius's portrait in Fire Emblem: Genealogy of the Holy War. 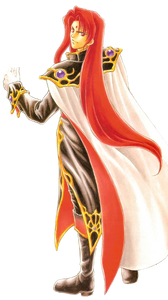 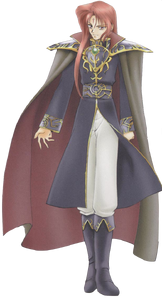 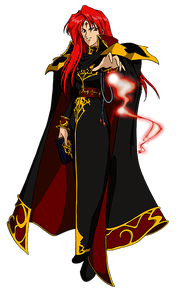 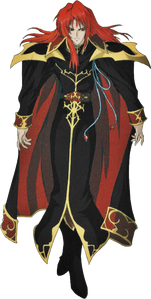 Retrieved from "https://villains.fandom.com/wiki/Julius_(Fire_Emblem)?oldid=4001504"
Community content is available under CC-BY-SA unless otherwise noted.