Julius Oppenheimer Jr. better known as Julius or Bomb Guy , is an antagonist and minor character in The Amazing World of Gumball. He is a 1920s' style bomb humanoid. He is one of the main Elmore Junior High bullies. He is voiced by Hugo Harold-Harrison.

He makes his debut in the episode, "The Lesson" as the main antagonist. He is one of the bad Elmore Junior High kids at detention. The reason to why he got punished is unknown. As shown in a clip, he seems to be the leader of the bad kids. When Gumball Watterson asked who they needed protection from, Julius responded by grinning evilly and saying "Me!", lighting the fuse on his head. His henchmen are Mowdown, Reaper, Rotten Cupcake, and Scythe.

He made other appearances in "The Finale," where he was among the angry mob attacking the Wattersons, in "The Question," where he and Mowdown destroyed Alan's lemonade stand, and were about to beat Gumball and Darwin, but quickly left and reappears as the main antagonist of "The Weirdo", in which he and his friends bully Sussie over her strange appearance, although she (quite literally) takes no notice.

In the episode “The Sucker”, Darwin runs into Julius again after he lands in detention. He convinces Darwin to join his gang. Julius and his friends, Reaper, Scythe, and Mowdown try to teach Darwin misdemeanors like stealing a purse and delivering pizzas to the Police Department. Julius’s plans go awry when Darwin keeps pulling his cute faces at him, and that Julius was alienated by his friends. In the climax of this episode, Julius befriends Darwin.

Just like Jamie, Julius is very mean, bad-tempered, brutish, violent and sinister. He is always grumpy and serious. He is also selfish and very leader-like. He likes to be in control. He is the leader of the bullies, the baddest kids in the school, and likes to pick on and abuse newcomers. He refers to his detention slaves as "deteys." He made Gumball and Darwin steal some items from Principal Brown's office. He is the smartest of the bad kids as he was the only one that was trying to escape while the others were beating each other up senselessly. He is shown to be very short-tempered as well, as when he is angered the fuse on his head is light up and he explodes. He sounds like Alan after his head is blown. He even likes to be destructive as seen in "The Question," where he destroys Alan's lemonade stand before he beat him. Julius is greedy and likes money. 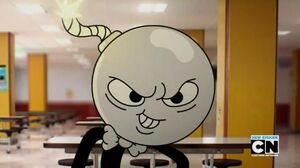