Jumbo is one of the two central antagonists (alongside Slim) of the 1988 sci-fi-horror-comedy film Killer Klowns from Outer Space. He is the first Klown to appear on screen and, coincidentally, the first one to be killed.

Jumbo is known for being one of the most creative, scariest, and most malicious klowns in the film, and is shown killing most of the characters in the film, and the second-most number of onscreen kills, behind Slim.

He was portrayed by Brett Leonard.

Jumbo is notable for being the first Killer Klown to be shown on screen, where he had killed a farmer and his dog while they were investigating the Big Top. Jumbo later showed up outside of the Big Top Burger, first dumping popcorn eggs into a dumpster, which grew into ravenous clown monsters that devoured a frycook, and then trying to lure a little girl in to kill her with a mallet behind his back. Thankfully, her mother intervened, telling her to finish her food, completely oblivious to Jumbo. This luckily saved her life, but it is unknown whether Jumbo then gave up, or decided to continue waiting and got the chance to kill her. Jumbo finally showed up at the Police Station where he first encountered Officer Mooney, who first found him funny, but was easily infuriated when he squirt him with a flower, causing Mooney to arrest him. Jumbo, after being cuffed by Mooney, quickly broke free and fled down the hall, making Mooney even angrier.

After catching up to him, Mooney walked Jumbo into his cell, and in a fit of rage hit Jumbo in the head with his flash light, sealing his fate. Jumbo, now enraged, showed clear hostility towards Mooney as he closed the cell doors, Mooney, still oblivious to the danger he was in, said his last words "By the end of tonight, you're gonna be begging me for mercy.", right before Jumbo killed him swiftly, while still locked inside his cell.

Officer Dave Hansen, Mooney's subordinate, was racing back into the station to call for back up to the nearby towns for them to send help against the clowns. With the lights out, and Mooney nowhere to be found, Dave carefully made his way through the station, finding Jumbo's former cellmates in cocoons, and Jumbo himself, who had turned Mooney into a ventriloquist dummy. Dave startled by this discovery stood in awe as Jumbo spoke to him through Mooney, giving a voice to Jumbo's sick and twisted humor. Jumbo speaking through Mooney reveals that he knows Dave's name, and that he had been watching Dave, Mike, and Debbie, the three protagonists. Jumbo finishes the conversation telling him, "Don't worry, Dave, all we wanna do is kill you.", before tossing Mooney to the ground, like a piece of trash. Jumbo then standing up, began to aggressively advance towards Dave, tossing aside two desks with ease.

Dave quickly began shooting at Jumbo, only to reveal that along with being strong, evil, and all knowing, he was completely bullet-proof. With Jumbo only two feet away, Dave made one last effort, and shot Jumbo directly in the nose, causing a fatal and colorful effect. Jumbo, with his nose destroyed, spun around into a colorful column of light, and exploded, leaving behind only confetti. Dave then proceeded to call the neighboring towns for back up, which arrived soon after.

Though Jumbo never speaks throughout the film, except briefly through Mooney, he has a unique personality and character traits that differentiate him from the rest of the clowns. Jumbo is known for being the most cruel, cynical, and argumentative of all of the clowns, preferring to kill mainly for personal enjoyment, instead of for the harvest of humans. Jumbo also seems to have no limits either, seeing that he intended to kill a little girl, bluntly with a mallet, strictly for enjoyment. Jumbo also appears to be much smarter than the other clowns, seeing that he mostly works alone, and is much smarter when it comes to killing people, since he plans very far ahead. 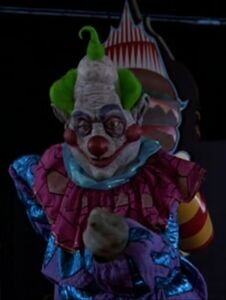 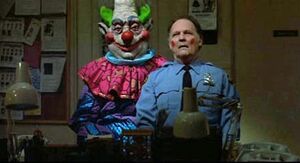 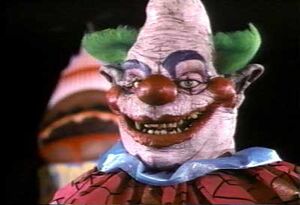 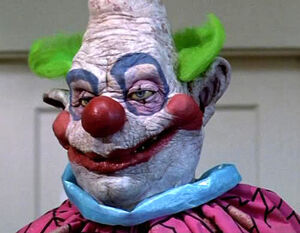 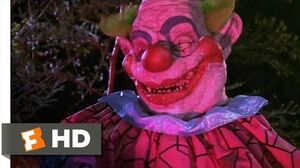 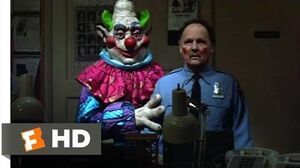