Obtain the Get Out of Hell Free Card from the Secret Six and Tarantula.

Kill the Secret Six and Tarantula.
Kill Dove (all failed).
Cheat death itself (succeeded).
Continue her organization after her resurrection (ongoing).
Escape the Birds of Prey (succeeded).

Junior is the daughter of Ragdoll Sr. and a supervillain from the DC Comics universe who is infamous for her extreme sadism and torture, even by supervillain standards - being a serial-rapist of both men and women who often gave her victims the choice of whether she killed them or their family/friends: if they pleaded for her to kill their family/friends she would still kill them, filming the process while leaving the tape for family and friends to find (so that they would hear her victims asking her to kill their family/friends instead). She is an enemy of the Secret Six, Tarantula, and the Birds of Prey.

Alex Merkel was born as the daughter of Peter Merkel, the first Ragdoll. Her father was initially disappointed at having a daughter, but she grew up to be very beautiful and soon became his favorite, although it's heavily implied that his "favor" included sexual abuse. Perhaps due to the abuse, she became close to her older brother, Peter Merkel Junior, who loved Alex dearly, and it's heavily implied that the two developed an incestuous relationship.

Peter Junior and Alex eventually went their separate ways, with Peter becoming a new Ragdoll. Alex on the other hand, feeling that her external beauty was nothing more than a mask for her inner ugliness, mutilated herself by sewing her eyes permanently open and her lips permanently parted. She also stitched little red patches on her nose and cheeks. Taking the name "Junior" and passing herself off as a man, Alex began a criminal empire that extended west from the Mississippi to the coast of the United States. She sequestered herself in a crate in the cellar of a gay strip club, as she didn't like to be seen, and used only a telephone and a notepad to direct a her vast criminal empire. Nobody was truly sure "Junior" existed, but they didn't want to take the risk of angering him.

She personally committed numerous crimes, mostly murder, rape or mutilation, as well as directing the more regular operations of organized crime carried out by the network of confederates ranged throughout her area of influence. She was assisted most closely by two confederates, once-conjoined identical twins named Tig and Aaron. Alex never showed her face to anyone except those she killed. Even the two brothers were ordered to wear blindfolds around her. On the few occasions when she ventured outside, she would wear a mask that covered up her whole head. She lacks empathy or compunctions, and is a capable, skilled and sadistic killer and torturer.

Alex was a devout Catholic and wished to atone for her numerous sins using the Get Out of Hell Free Card (forged by the demon Neron) that was being protected by the Secret Six (including her brother) and Tarantula. After sending just about every bounty hunter and assassin in the DCU after the team and making a solid effort to kill them herself, Junior was killed by Tarantula.

Alexa Merkel has returned from the grave but her organization is now being facilitated by her trusted associate, Mr. Tripe. The elderly Mr. Tripe interviews two women who wish to be receptionists at Merkel’s firm which is a front for her criminal empire. Strangely enough, both women go by the name Ms. Lachess but they both have different first names: Triss and Somnia. Tripe demonstrates his obscurities by refusing to let either woman to have a seat during the interview. He explains himself by saying he “likes taking the opportunity to disadvantage others during first meetings. Tripe makes the situation even more peculiar by showing the women a couple of inkblot images and asking them what they see because this is “the extent of the interview”.

At first, their answers are conventional like a bouquet of flowers and these answers of course, disappoint Tripe. Tripe tells them he is looking for associates that are completely honest, not just with the company but with themselves so he tells both women to strip. Both women are stunned by Tripe’s request but they reluctantly agree because they both want a job. Both women expose their naked body to Tripe and Tripe notices several hideous scars on both women. Tripe then asks them to divulge on how they got those disfigurements but they both refuse.

Mr. Tripe loses his patience and explains to both of them that they are actually being interviewed for the position of being a personal assistant to one of Tripe’s fellow colleagues: a Mr. J (Joker interlude). Tripe gives both women one more chance to impress him. This time they thought creatively and said the inkblot looks like a woman's crushed skull with her entrails hanging out. Tripe was so pleased by their answers that he gave the position to both women.

As Zinda distracted Tripe, Dinah activated her comm link with Oracle who has just shut off the firm's security camera feed which gives the team a two minute window to gather what evidence they need to expose the firm's corruption. Zinda continues to play the innocent yet desperate client by kissing Tripe and begging for his counsel in a personal matter. "Ms. Hargison's" cover story is she is being blackmailed by some unsavory characters. As for the team, Hank distracts the interns with his charm while Dinah and Dawn pry open the elevator's shaft doors. They swing down the shaft by using access ladders and avoid carefully placed motion detectors.

In Tripe’s office, Tripe confesses to "Ms. Hargison" that he is dying but he is not afraid of death because he found salvation in Alexa Deborah Merkel, the firm's savior. Unfortunately, Triss and Somnia Lachess realize who Hank really is. They draw their guns on him and demand to know why the Birds of Prey are infiltrating the firm. Tripe hears the commotion outside his office doors and begins to realize that "Ms. Hargison" and his entourage are not who they say they are. Tripe attacks Zinda Blake but Zinda head butts Tripe because the police will need someone to testify for what has transpired at the firm.

At the same time, Dinah and Dove make their way to what appears to be the basement of the firm. Dawn notices that the basement lights flicker, there is graffiti covering the walls and she finds little rag dolls hanging from the ceiling. However, Dinah's attention was more drawn to a single object in one corner of the basement. From what she could tell, the object was a wooden chest with a telephone and a notepad attached to it. It doesn't take Dinah or Dawn long to realize that they are not alone in that basement. Dove is stabbed by Junior with a pair of scissors. Black Canary saves Dove from Junior by using her Canary Cry. Junior is knocked out but Canary's scream began to shake the firm's building.

Meanwhile, Renee Montoya has returned to Gotham. She has been hearing rumors about the purchasing of weapons and drugs. The deal apparently is supposed to take place in Gotham’s sewers. She also overhears the possibility that corrupt cops are responsible for setting up the purchase. One night, Huntress finds Montoya opening a manhole cover with a crowbar. Both women agree to help each other and they both drop down the access chute.

Huntress spots an armed lookout at one end of the tunnel and takes him out. They head down to the tunnel complex which is in the center of Gotham’s sewage system. They eventually come across the deal and leap into action. Unfortunately, the rapid gunfire ruptures some of the sewers’ pressure valves and gallons of sewage water come crashing through the tunnel complex. Huntress uses her grappling crossbow to lift Montoya and one of the dirty cops into the air as the rest of the perpetrators are swept away.

The women make for a safer vantage point and begin to interrogate the corrupt cop. The cop however, pleads with the two women to just drop him into the raging sewage water and let him drown. His reason for wanting to die is because someone who worked for “undisclosed firm” put him up to arranging this deal and if the deal was not successful then his wife would be killed for his failure. The facilitator of this deal had already murdered the officer’s sister in law and now this facilitator will kill his wife. As a side note: the inkblot that Tripe showed to his potential interns may be the remains of the officer’s sister in law.

Huntress calls Oracle and tells her to get the team out of the firm before its too late. Unfortunately, Babs can't hear Helena's order because Huntress' signal is too weak in the sewers so she calls in Catman to help Huntress at the firm. Huntress realizes this lack of communication and decides to head to the firm herself and rescue her teammates. When they reach the surface, Huntress and Question hop on Huntress' motorcycle then they make their way to the firm.

Catman meets Huntress and Question in front of the firm. The Lachess twins take Hawk as their hostage and lead him to the roof of the firm where a helicopter is waiting. Huntress, Question and Catman intercept the helicopter before the twins did. They rescue Hawk and Huntress puts an end to the twins by using an explosive arrow to blow up the helicopter that they were in. After all of this chaos, the Birds couldn't find Junior who has escaped once again and Babs promotes Huntress as the new leader of the Birds of Prey. 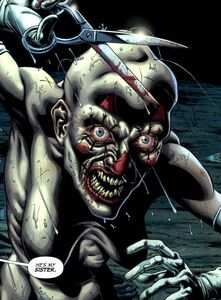 Junior without her disguise 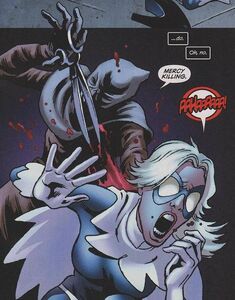 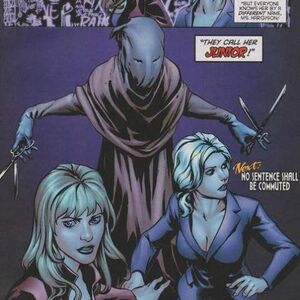 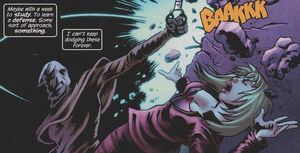 Junior cutting off her brother's fingers 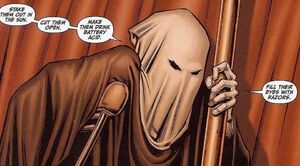 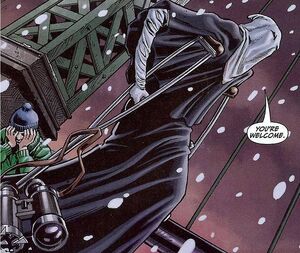 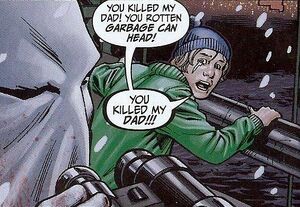 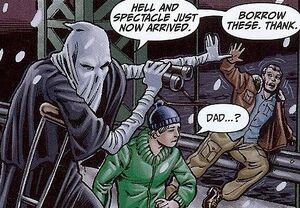 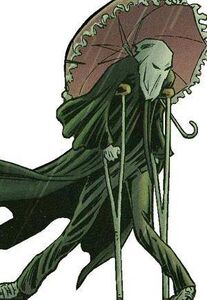 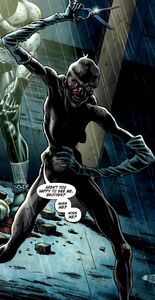 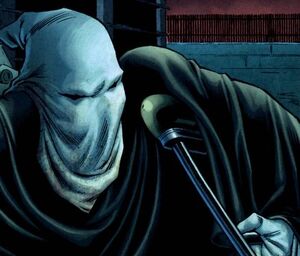 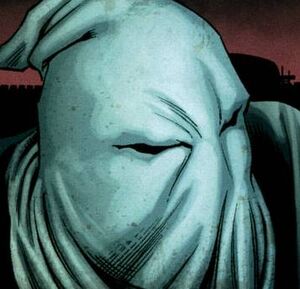 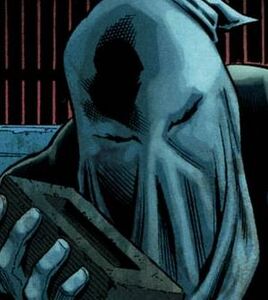