Owner of the Club

Hei Xiong Jr., more commonly known by his nickname Junior, is a minor antagonist in the American web cartoon series RWBY. A crime lord operating in Vale and the son of Hei Xiong Sr. Junior owns and manages, The Club and has several henchmen, including the Malachite Sisters even being allied with their mother’s gang

He is voiced by Jack Pattillo.

Junior wears a white dress shirt with a black vest over the top, a red tie, black gloves and black dress pants. He has gray eyes, short black hair, and a black beard with a mustache. Junior is also exceptionally tall, standing a full head over Yang and the twins.

Sometimes, Junior can be seen wearing red tinted glasses identical to the ones his henchmen wear.

Not much is known about Junior's past. It is suggested that he has a history as an information broker, keeping tabs on the various goings-on of Remnant. He is said to have a reputation for knowing everything and has business connections with underworld figures such as Roman Torchwick. Junior runs a club and has a large number of henchmen, though it is not clear when it was established or if he has any business partners.

In the "Yellow" Trailer, Junior is seen talking with Roman Torchwick about loaning some men for a job. Yang Xiao Long later arrived at the club and walked up to the bar to pressure Junior into saying what he knew about a woman she was trying to find. When he said he didn't know the woman, Yang began to leave, but Junior had his men surrounding her. She feigned at kissing Junior then sucker-punched him to the other side of the club. After Yang defeated all his subordinates and the Malachite Sisters, Junior attacked again, but Yang activated her Semblance and knocked him out the window of the severely damaged club.

In "Painting the Town...", Junior was able to rebuild the club after Yang wrecked it, and some months later, Yang and Neptune arrive to learn what Junior may know about the plans Roman Torchwick and the White Fang were making. He tells them that Torchwick contracted his men to assist in Dust robberies, but Torchwick was apparently disappointed with his men's performance as he never heard from Torchwick or his men again.

Junior and two henchmen appear in RWBY: Amity Arena as a card called "Xiong Family". When deployed, two henchman rush to attack while Junior fires his bazooka from a distance.

Junior is a somewhat brutish person who doesn't like to be pushed around and picking on others. He also tends to hide behind his henchmen unless forced into a fight himself. He is also somewhat gullible, as he easily fell for Yang's offer to "kiss and make up" before being punched in the face.

Junior also appears to get intimidated rather easily, as seen with Yang, following her return to The Club in "Painting the Town...", which was due to their previous encounter. Junior even has a discontent for his men, as he is disappointed by their failures.

Junior's primary weapon is a missile launcher that can also double as a large club or bat. He is also a decently skilled fighter, and displays a great deal of strength while fighting Yang. Even while defending with Ember Celica, he has the capacity to overpower her with his weapon, which none of his henchmen could. His durability is also noteworthy, withstanding numerous punches that incapacitated his henchmen in a single hit.

In terms of ability, Junior is also noteworthy out of combat. He appears to be a form of information broker, and according to Yang, "People say you know everything", implying that he's a very highly regarded information source. 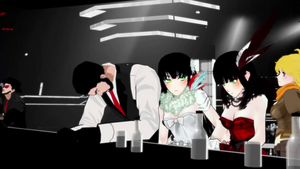 Junior at the bar with Melanie and Miltia 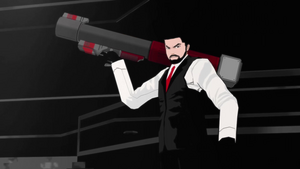 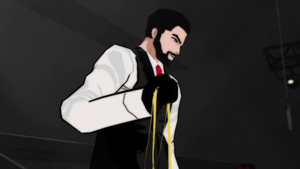 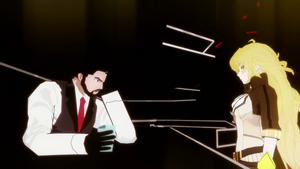 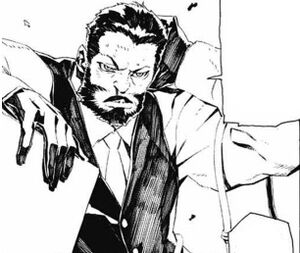 Junior in the manga 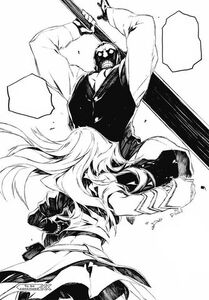 Yang's battle with Junior in the manga 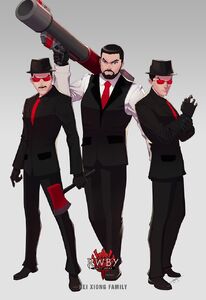 Junior and two henchmen as they appear in RWBY: Amity Arena. 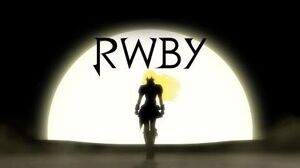