Rule the Jade Palace (both failed)

Junjie, also spelled Jungjie and formerly known as Master Junjie, is one of the main antagonists in Kung Fu Panda: Legends of Awesomeness. He and Master Shifu with whom he shares a resemblance were once students of Master Oogway. Junjie wanted to get rid of Shifu (whom he now hates) so that he could take over as the master of the Jade Palace.

He was voiced by Stephen Root.

Junjie first appeared in the episode "Sight for Sore Eyes". He joins Master Chao for a meeting with Master Shifu to inspect the Jade Palace. Shifu tells Po and his other trainers to go back to their quarters. However, Junjie secretly offers to let Po have a peek of the masters' ancient sparring. Later, Master Po witnesses the event, when Junjie performs the Golden Lotus Clap, which makes Master Po blind. This leads him to accidentally ruin the sacred Pyramid of Fortitude, which gets Master Shifu replaced by Junjie as the new master. After Junjie replaces the Furious Five with his leopard warriors, everyone blames Po. Soon, Po finds out that Junjie has imprisoned Shifu and plans to destroy him. With none of the Furious Five wanting to trust Po anymore, he goes off on his own to stop Junjie, only for him and Master Chao to be imprisoned as well. The Furious Five are soon convinced by Mr. Ping that Po needs their help, and they set off for the rescue. As they fight off Junjie's minions, Junjie is fought and defeated by Po. Junjie and his minions are then sent to Chorh-Ghom Prison while Master Po regains the trust of the Furious Five.

Junjie appears again in "Ghost of Oogway". He disguises himself as Grand Master Oogway's ghost to fool Master Po into listening to him. This advice eventually leads Po to drive Shifu out of the Jade Palace. As Po runs off in search of Master Shifu, Junjie and his henchmen attack the Furious Five. Po returns to find the Furious Five tied up and realizes Junjie's plot. As they battle, the ghost of Master Oogway apparently returns and punishes Junjie. It is soon revealed that Shifu used the same trick to disguise himself as the ghost of Oogway, and with the help of Po and the Furious Five, Junjie and his henchmen are defeated. 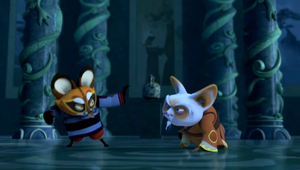 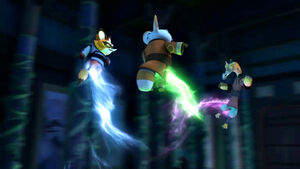