Reality warping
Omnipotence via on the inter-dimension Neo World Program

Antagonizing anyone who gets in her way.

To revive herself (succeeded).

To create many of herself called Junkoland and destroy the participants (failed).

Alter Ego Junko Enoshima is the main antagonist in Danganronpa 2: Goodbye Despair and the overaching antagonist of Danganronpa: Ultra Despair Girls. It is an AI version of Junko Enoshima that was uploaded into and infected the Neo World Program to cause a mutual killing game, the killing School Trip.

After the end of Chapter 6, Alter Ego Junko was deleted forever after the Forced Shutdown activated, ultimately ending her plan to create "Junkoland".

Alter Ego Junko manipulates both the antagonistic group called the Warriors of Hope and the adults of the Towa City in the form of Shirokuma and Kurokuma, causing the deaths of hundreds of people throughout Towa City. In the end, both robots are destroyed by Izuru Kamukura to salvage their hard-drives for the AI, during which Junko made sexually suggestive comments.

After Kamukura was captured by the Future Foundation along with other Remnants of Despair, he downloads Alter Ego Junko into the Neo World Program. Once in the game, she started changing the programming surrounding the graduation and also began the Field Trip of Mutual Killing. Her motives behind doing both things were so that she could obtain comatose bodies to control and lure the Future Foundation into the game and kill them.

Alter Ego Junko is beautiful and resembles the antagonist Junko Enoshima. She wears the same clothes Junko have. Though her skin is extremely pale white.

Alter Ego Junko doesn't talk too much but she has a malevolent personality that she tries to kill the heroes. Apparently, unlike Chiaki Nanami's AI that were made of the memories from the Remnants of Despair about their impression of Chiaki, Alter Ego Junko has all of the past memories of her original counterpart, even remembering "her" death, which hinted that she is completely made of Junko's memory and has her personality (especially her obsession of despair and her unstable mentality) as well.

Therefore, Alter Ego Junko is obviously a reincarnation of the original Junko herself inside the New World Program. Her goal of bringing despair never changes, and she intends to revive herself back into the real world via possessing the bodies of the Remnants of Despair and create "Junkotopia" in order to make herself everywhere in the world. Makoto Naegi had points out that if Junko is revived via her AI, then the whole world's situation will be even worse.

Alter Ego Junko is essentially omnipotent due to her manipulation of the virtual world called Neo World Program. She has a unnatural size, and possesses great strength. 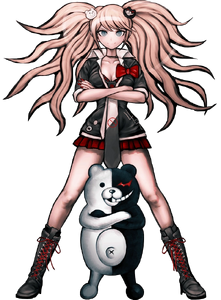 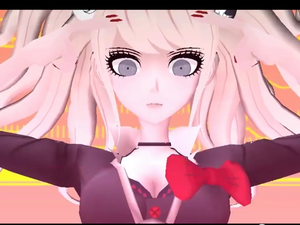 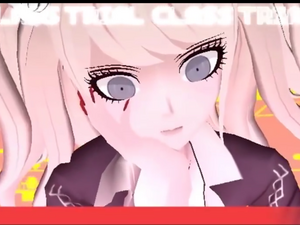