Find the treasure and get rich (succeeded).

Jamison Fawkes, or better known as Junkrat, is a mercenary and a former resident of the Outback. He is one of the playable characters in the 2016 game Overwatch.

He was voiced by Chris Parson.

Junkrat is an explosives-obsessed freak who lives to cause chaos and destruction.

The attack on the Australian omnium's fusion core forever altered the landscape of the Outback. After the detonation, the area was transformed into a harsh, irradiated wasteland, littered with debris and the twisted fragments of the ruined facility, and unlivable to most.

But there were some who survived. Calling themselves the Junkers, they scavenged the husk of the omnium and formed a lawless, cutthroat society in its shadow. Junkrat was one of them, eking out a living reclaiming metal and components from the ruins. Like many others, he was affected by the lingering radiation. This touch of madness made him ideal for handling dangerous explosives, a love which he turned into an obsession.

He came to notoriety when he discovered an extremely valuable secret in the bones of the omnium. Though few knew the nature of what he found, he was nonetheless pursued by bounty hunters, gangs, and opportunists wherever he went, until he made a deal with the Junker enforcer Roadhog, who grudgingly agreed to be his personal bodyguard in exchange for a fifty-fifty share of the spoils.

Now, with Roadhog in tow, Junkrat has left the Outback, and embarked upon an international crime spree leaving nothing but havoc and bedlam in his wake.

Jamison Fawkes was a Junker from the Outback who collected bits of metal and scrap for a living. The job combined with the effects of the lingering radiation gave him a deranged love of explosives.

In the remains of the ruined omnium, Jamison found a large and incredibly valuable treasure, and he became the target of bounty hunters and gangs. He hired the Junker enforcer Roadhog as a personal bodyguard in exchange for half of his profits. Together, the two went on a crime spree around the world.

In Going Legit, Junkrat and Roadhog made a deal with the CEO of Hyde Global in Sydney to rescue its workers from Omnic terrorists. They found out that the "terrorists" were actually Hyde Global drones, and that the CEO had set them up, so they hanged him from the top story of his skyscraper before blowing it up.

Junkrat and Roadhog have stolen royal artifacts from King's Row, destroyed shops and trucks in Paris, robbed the arcade in Hanamura, and stolen most of the Bank of Dorado's gold in their crime spree.

Junkrat is established to be a chaos-inducing maniac who has a strong passion for explosives and destruction. He hates being tricked and taken advantage of and is willing to do any job that allows him to blow things up. He is also a bit clumsy, as shown by one of his Highlight Intros where he hits himself in the groin with one of his bombs. Like his bodyguard, he has an abhorrence towards Omnics.

Despite his criminal ways, Junkrat does have many positive virtues. He seems to care about his friends, an example of this being his expressive rage towards a police officer for calling Roadhog fat in Going Legit. He often makes brash puns to fire and explosions and even has some friendly voicelines as well, such as saying to "smile" and "have a nice day". He also prefers to reason with people rather than violence to get out of a bad situation.

Junkrat is pretty laid back in battle, as shown by his constant cackles in a fight and his voice lines after placing a steel trap or a concussion mine. He also speaks in a positive and uplifting tone, except for when Zenyatta's Orb of Discord is attached to him. Surprisingly, Junkrat knows manners well, as he says phrases like "I beg your pardon," and refers to Mei as "Ma'am" in their pre-game conversation.

Like his friend Roadhog (and all Junkers), however, he shows a great disdain towards Omnics. When killing an omnic character, he remarks they're going back to the scrap heaps, and in the Nepal map (which is an Omnic monastery), he even darkly remarks that he'll be happy to help a "bot go into the light". Unlike the more heroic Zarya, however, he bears no ill will towards the cyborg Genji, perhaps showing that a part of him still sees heavily modified people as people first, not machines.

In Going Legit, he shows a desire to turn his explosives obsession into a legit job, but his chaotic, forgetful nature makes him forget about the supposed human hostages that the CEO of Hyde mentioned. Had the CEO not lied, Junkrat would've gleefully killed innocents. 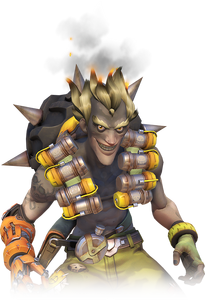 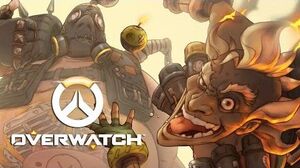 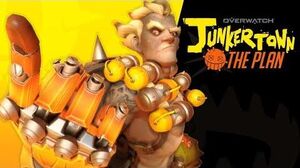