Hobknobbing with socialites at parties.

To become wealthy by any means necessary, even if it cost the lives of millions of people (failed).

Juno Skinner is the secondary antagonist of the 1994 action movie True Lies. She worked with Salim Abu Aziz.

She was portrayed by Tia Carrere, who also portrayed Akivasha in Kull the Conquerer.

Juno Skinner is a beautiful but deranged and greedy woman who works as an arts and antiques dealer, who was working for terrorists by collecting information for their organization with her feminine wiles. She also helps smuggle arms into the U.S. by placing them into ancient artifacts. When asked by international spy Harry Tasker why she is helping these raving psychotics (the terrorists), Juno replies "Because they're very well-funded raving psychotics, and I'm getting a lot of money! You think I care about their cause? Or yours? Not at all. See, America is on top now. But so was Rome, once. All civilizations crumble. One nation succeeding over another. What does it mean in the long run? The only important thing is to live well. And... living well takes money."

Eventually she met her demise when she kidnapped Helen Tasker, Harry's wife, hostage. In the struggle with Helen, she shot the driver and the limo was driving to the edge of a broken bridge. Harry, in a helicopter managed to save his wife, but Juno was killed when the limo drove over the edge and hit against some rocks. 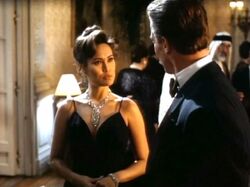 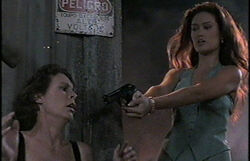 Retrieved from "https://villains.fandom.com/wiki/Juno_Skinner?oldid=4182524"
Community content is available under CC-BY-SA unless otherwise noted.