Leader of SIN
Agent of the Illuminati

Get revenge on M. Bison for murdering her parents (succeeded)

Juri Han, also simply known as Juri, is an antagonist in the Street Fighter franchise, being a thrill-seeking SIN operative striving for revenge against M. Bison who later becomes the leader for the organization. Debuting in Super Street Fighter IV, she is the first Korean character and the first true villainess of the series.

She has been voiced in all appearances by Eri Kitamura in Japanese and Jessica Straus in English.

Born and Raise in South Korea, Juri show prowess for Tae Kwon Do to the point of being named the legitimate practitioner of Tae Kwon Do at age 15.

Her father was a lawyer prosecuting powerful criminal organizations, and was after Shadaloo. M. Bison had the family car attacked. During the ordeal, Juri's parents died and Juri lost her left eye. After the incident, she swore revenge on Bison and threatens to "Eat him up, bones and all".

Seth and his scientist give Juri a New "eye" which in actuality is a smaller version of his Tanden System called the Feng Shui System. Juri feels the waves of Energy the "Eye" produces. Later she attacks a carnival with some rouge SIN agents. Chun-Li, Guile and Cammy are summoned to stop her rampage. She battles Chun-Li with little effort, taunting throughout the battle and Attacks Chun Li when she notices a small child and his dead mother. Before she can kill the detective, the System malfunctions forcing her to retreat. Seth orders her to capture the Dolls, Bison's Former Bodyguard at an old Shadaloo facility.

She effortlessly defeats and subdues the dolls. Cammy and Guile arrived as Juri was carrying Juni and Juli. Cammy attacked but stop at Juri uses Juni as a shield. She taunts Cammy on Why she is trying to the dolls and realizes that Cammy was one of them and asks where in Chun-Li in a taunting manner. Guile sees an opportunity and Catches her off guard. Despite putting up a good fight, Guile loses to her. As she was taking flight Cammy and tries to stop However, Pushes a Stretcher with Juni in it to attempt to kill both women but they landed in a deep snowdrift, ensuring their survival.

She is confirmed to return along with Urien and they will also appear in the Cinematic Story Mode and she is an anti-villain.

Juri makes an appearance in Project X Zone. She is a boss and is a supporting character for any of the playable characters.

Juri appears as a support spirit that reduces damage taken from poison attacks. Her spirit battle is a stamina battle on the Ω form of New Pork City against Bayonetta who favors side specials and becomes more powerful when at high percentage, but has lower jumps.

"An agent of SIN and a practitioner of Taekwondo. Along with losing her parents to M. Bison, she also lost her own left eye. SIN eventually replaced her missing eye with the "Feng Shui Engine", a device that greatly increases ki energy and thus gives her superhuman powers. Although ostensibly cooperating with SIN, and carrying out assassinations for them under the codename "Spider," she actually has secret designs to use her superior, Seth, for her own ends. She is short-tempered, vituperative, deceitful, cunning, and sly, and is often provocative, opprobrious, and derogatory. She is also a parsimonious hedonist who simply enjoys destruction, and the majority of her actions are determined by whether she thinks it will be fun or not." 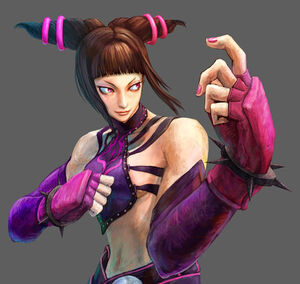 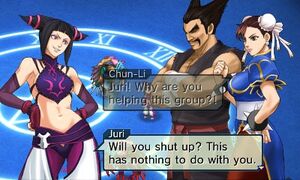 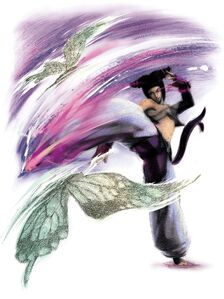 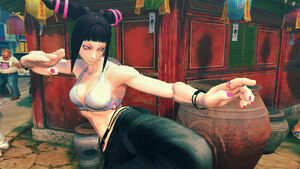 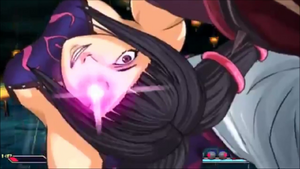 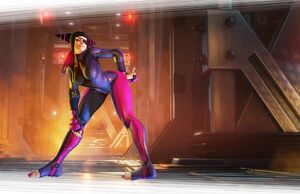