Spread the word of Grandmaster Meio in the Underground

Juroung is character from the Strider series of video games, first introduced in the 2014 Strider remake.

Juroung is a shaman and "true disciple" of Grandmaster Meio. A fanatical follower that worships Meio as a true god, and has made his life calling to spread the words of Grandmaster Meio in the Underworld, a location in Kazakh City where his rule doesn't reach and the only place dissenters and citizens escaping Meio's oppressive rule can find solace. Juroung has taken residence in the east wing of the mysterious Buried Temple, an ancient ruined temple whose purpose or creator have been lost to time. From here he has taken up leadership of the underground world in order to ensure Meio's will is carried out even in such a place.

Juroung is also Meio's most trusted general and enforcer. He is so close to Meio, he is more trusted as an aid than General Mikiel or the Four Winds. Juroung's powers over water are granted by a small Gravitron core (a machine capable of controlling gravity) that has been embedded within his body. With this power Juroung fights and kills anyone who stands against the Grandmaster's plans for a perfect utopia.

After Hiryu takes care of the Grandmaster's lieutenant Xi Wang Mu and Professor Schlange's machines, Meio visits Juroung directly in his chambers and orders him to take care of the wayward, with Juroung confidently stating he will succeed as Meio's will guides his hand. Hiryu eventually meets the shaman as he needs to obtain the Magnetic Plasma upgrade from him in order to continue his mission. Juroung fights Hiryu while discussing his lack of faith and why he rejects Meio's calling. In the end Hiryu is able to overcome Juroung's tricks and the shaman is eliminated after his Gravitron apparently goes unstable and explodes with him.

Juroung is a tall man with a well-build physique, completely white eyes, long white hair styled in a ponytail, and dark skin.

He dresses in a blue naval jacket open in the front with no shirt, large pleated blue trousers or "hakama" with a piece of cloth in front with the logo of the Underground and no footwear. A large contraption is embedded to his back with two curved tubes going down, which assists him in gathering water for his attacks.

Juroung is a fanatical follower of Grandmaster Meio, and blindly follows his every command regardless of the risks involved, and would gladly and willingly die for him. Juroung believes truly that Grandmaster Meio's plans for the world and fights wholeheartedly to see his utopia realized. Juroung's belief in Meio leads to him thinking of himself as better than those with "weaker beliefs" and has full confidence that he will win in battle under his guidance.

Juroung has taken residence in the Underworld, a location where everything is disorderly and chaotic. He has convinced himself that paving the way for Meio’s order in such a location is his destiny or life calling, and dedicates to this endeavor entirely. The powers granted to him have made him extremely arrogant and self-absorbed, thinking these powers are those of a god and believing they give him the right to spare or execute those opposing him.

Juroung's main power is his ability to control water through the gravity control provided by a small Gravitron that has been embedded within him. Juroung can manipulate bodies of water to his heart's content and shape them into ghostly forms to attack any opponent. Some of the ways he uses water as a weapon include creating giant hand constructs to crush or punch his enemies, form powerful streams of water shooting from the ground everywhere or forming swarms of watery insects to strike. Juroung can also use water to shield himself or raise his position to evade his enemy.

Juroung's Gravitron also allows him to control gravity directly, creating powerful gravity wells that pull his opponents in and stuns them, leaving them at his mercy. 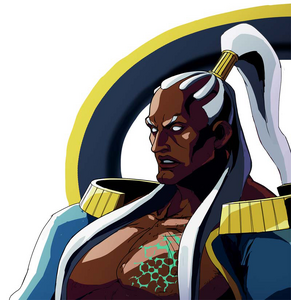 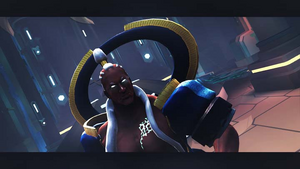 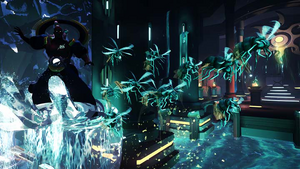 Retrieved from "https://villains.fandom.com/wiki/Juroung?oldid=3750787"
Community content is available under CC-BY-SA unless otherwise noted.