Each members possess their own unique super powers and attributes

Destroy Legion of Heroes for rejecting them.

The Justice League of Earth were a supervillain group from DC comics set up by Earth-Man under the lie of "upholding Superman's ideals" : in reality they were a tool for Earth-Man to enforce absolute xenophobia towards aliens on Earth and by extension allow the villain to gain an iron-grip on the planet by removing those that could stop his progress.

The organization was created using rejected members of the Legion of Superheroes - since its founder was also a rejected would-be-member of that organization and in many ways he created the entire society to scorn the heroes he had originally wished to join. They once all auditioned for the Legion of Super-Heroes, but were rejected due to their powers being judged to be ineffective in battle - although it was later revealed that they were actually rejected as telepathic probing discovered they had deep-rooted psychological issues that would have made them and their allies potential threats.

The JLE spread their ideals of distrust and hatred against all aliens across Earth and were successful to convince the planet's inhabitants into believing them, resulting the planet to fall under the dictatorship of Earth Man, seceding from the United Planets, and a global persecution of aliens among Earth's people. The Legion of Super-Heroes were also branded as fugitives for perpetuating the "lies" of Superman's true origins in which the JLE was tasked into hunting them down. The JLE captured many Legion members and allowing them to have their powers absorbed by Earth-Man, and used the Legionnaire Sun Boy to turn many of the suns in the galaxy red. The desperate remaining Legion members resorted to summoning Superman to their time for his help, and stormed the JLE's satellite headquarter where they recovered information containing the false claims regarding Superman's origins, which they exposed to the people of Earth that they had been lied to, and freeing Sun Boy. The Justice League of Earth were defeated and imprisoned on the prison planet Takron-Galtos. 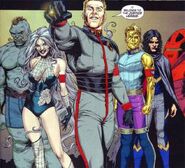