Justy (by Jessica, Montgomery and Bryce)

Protect himself from his abusive step-father Seth (succeeded).

Justin Foley is the secondary antagonist of the 2007 novel Thirteen Reasons Why by Jay Asher. He also serves as the secondary antagonist of the first season and appears as an anti-hero in the second, third and fourth seasons of the 2017 Netflix adaptation. Justin is a part of Hannah Baker's Baker's Dozen and the subject of Hannah Baker's first and ninth tapes from her list of reasons why she commits suicide. Justin and Hannah dated in the beginning of the school year until Justin began spreading false rumors of him and Hannah hooking up on their first date when in actuality they only kissed a couple times. His second tape revealed that he allowed Bryce Walker to rape Jessica the night of Jessica's party and did nothing to stop him.

Justin was shown to have a tumultuous home life. His mother became a neglectful drug addict with a rotating set of dangerous and violent boyfriends, including Seth, who strangled Justin on screen and was implied to have abused him in the past, and an unnamed stepfather who molested Justin when he was five. While talking about his absence, his coach mentions that he suspects Justin has been abused, thus his long stays at Bryce's pool house. Despite being brought up in an unhealthy environment Justin was one of the popular kids in school and a member of his high school's basketball team. During his freshman year, he dated a fellow student named Kat, who unfortunately was moving and through a going away party at Hannah Baker's house, the new girl in town. A party that was attended by Hannah Baker. When he and fellow teammate Zach arrived at the party they began rough housing on the lawn while the sprinkler system was on. Kat, Hannah, and fellow classmate Clay Jenson witnessed them rough house on the front lawn while the sprinkler system was activated, but after seeing how soaked they were Kat denied them entry to the house. Unable to enter the party, Justin and Zach left for the night but not before Justin gave Hannah a charming smile that quickly won over Hannah who became immediately infatuated with him. Once Kat moved away she and Justin ended their relationship and Justin and Hannah began a flirtatious relationship that's quickly blossomed into romance. Hannah began lead Justin on a wild goose chase to keep him interested in her. She began by luring him onto the bus, got his number, ditched him on the bus, and told him she'd call him. As the bus drove off he called out to Hannah as to where the bus was going as she responded that she does not know as she doesn't take the bus.

Later that day, Hannah calls Justin so as to schedule a date but are interrupted by Hannah's mother who wanted her to finish her homework before she used her cell phone. In a way to deceive her mother the two use the excuse of homework to get her to leave them alone. Not convinced her mother is not listening in on their conversation, she tries to use a math problem as a way to meet up with Justin.

In the first season Justin is shown as a selfish person who enjoys compliments from his friends, including Bryce. He lies to Bryce, Zach and some other friends of his about what happened with him and Hannah in the park, claiming that they had sex. In order to impress his friends he even showed them an upskirt picture of Hannah he took while they were in the park.

Justin feels a great sense of loyalty and care toward Bryce. After Hannah created the tapes that included her accusing Bryce of raping Jessica, Justin went to extreme lengths to try and prevent the tapes being exposed and was very hostile toward Clay for siding with Hannah on the matter. After Jessica confronts him about enabling her rape Justin tries to defend himself by telling Jessica of all the things Bryce has done for him.

Justin is shown to care about his girlfriend Jessica as he stood guard by her bedroom door when she was inside, unconscious and drunk. However his care for her was not unlimited as when Bryce made suggestive comments about her and asked to be allowed in Justin permitted him although he did initially show some resistance. Although Justin does change his mind and enters the room to stop Bryce, Bryce overpowers him and throws him out and locks the door. Rather than go and get help from the others at the party Justin did nothing and enabled Bryce to rape Jessica. That being said Justin did feel extreme remorse for not helping Jessica as shown by the fact he cried while outside the door.

Justin had strong anger issues which often caused him to lash out at others, namely Clay and Alex. He also shows anger at Hannah for exposing Jessica's rape.

Despite Justin's determination to protect Bryce from being exposed as a rapist, he did not enjoy keeping Jessica in the dark about everything. In the end he decides to finnally tell her what truly happened and is apologetic for not helping her. The extreme regret he feels drives him to become homeless rather than rely on Bryce anymore.

In the second season, Justin is shown to have better control of his anger and is no longer willing to hurt others to protect Bryce. He even goes as far as to testify against Bryce in court which helps him be convicted of Jessica's rape. Justin is even told prior to his testimony that he will be arrested himself for rape accompliceship if he confesses to enabling the rape, but still does so anyway to help Jessica receive justice. When Clay takes Justin in to live with him, Justin takes a strong liking and gratitude to Clay and the two become close over time. 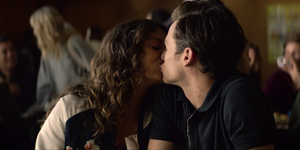 Jessica and Justin kissing in a flashback in "The Drunk Slut". 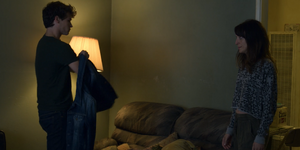 Justin and Amber in "The Missing Page". 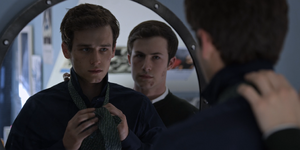 Justin and Clay in "The Box of Polaroids". 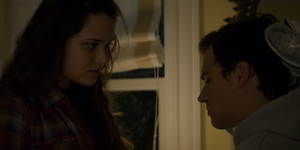 Hannah taking care of Justin's bruises in a flashback in "The Box of Polaroids".

Zach and Justin hugging in "Bye". 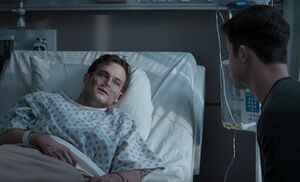 Justin with Clay in hospital.