Ruin Tony Stark's image by publicly humiliating him and to become much more successful than him (failed).

Justin Hammer is one of the main antagonists in Marvel comics most notable for being a rival to Stark International and by extension an opponent to Tony Stark - better known as the armored-adventurer Iron Man as his third archenemy after Mandarin and The Crimson Dynamo being one of the main antagonists of the Iron Man franchise.He was the main antagonist of several major story arcs during the 80's and 90's,most notably Demon in the Bottle and Armor Wars 1 among others until the 2000's where he dies. He is also the father of the second Crimson Cowl and grandfather of Sasha Hammer both of whom are supervillains who continue his legacy after his death.

Justin Hammer is an unscrupulous and manipulative industrialist and head of various international design and manufacturing firms. A long time competitor of Stark International, Hammer became one of the leading weapons suppliers in the world after Stark International moved out of weapons production. Hammer maintained other manufacturing interests besides weapons and it was while bidding for an electronics plant to be built within the borders of the small Communist country of Carnelia that Stark and Hammer came into direct conflict.

Knowing that Iron Man was an essential part of Stark International's image as well as security (but not knowing that Iron Man was actually Anthony Stark), Hammer directed his engineers to develop a means to override Iron Man's armor. The engineers eventually built a hypersonic device able to breach the armor's refractory coating. Over a period of weeks they tested their ability to override the cybernetic circuitry of the armor by activating various weapons systems against Iron Man's will. Iron Man dismissed these incidents as mechanical malfunction rather than a deliberate override.

Finally Hammer activated Iron Man's repulsor unit, causing Iron Man to kill the Carnelian ambassador to the United Nations. His armor impounded, Tony Stark tracked the reclusive Hammer to the Mediterranean Sea, where he was taken captive by Hammer's mercenaries. There he learned about Hammer's designs upon him as well as some of his shadier operations such as the financing and outfitting of various costumed criminals in exchange for 50% of their profits. Stark managed to wreck the device that could override his armor and then donned his spare suit in time to battle Hammer's reserves, a small army of powerful costumed criminals.

Vanquishing them, Iron Man damaged Hammer's floating villa and captured the man who designed the equipment that overrode his armor. Justin Hammer managed to escape. Although Iron Man managed to clear himself of the murder charge by exposing certain of Hammer's activities, he could not effectively thwart Hammer's operations, since his diverse corporate holdings are unknown to the authorities. Iron Man encountered Hammer a second time when he kidnapped Stark's girlfriend Bethany Cabe and brought her aboard his huge submarine. Iron Man managed to severely damage the vessel but was unable to apprehend Hammer.

Justin Hammer remains at large, a reclusive billionaire overseeing various international business interests, legal and otherwise. Among the many costumed criminals whom he has outfitted and financed operations for are Blacklash, Blizzard, Melter, Man-Killer, Beetle, Spymaster, Leapfrog, Porcupine, Water Wizard, Stiletto, Discus, the Constrictor (Frank Schlichting), Blue Streak (SHIELD Super-Agent) and Captain Barracuda. Among those one of Hammer's companies has built weaponry for are the Orb, Viper, and the Black Spectre and Zodiac criminal organizations.

In Iron Man 2, Justin Hammer is the secondary antagonist. In the movie, Justin is portrayed by Sam Rockwell. He's also portrayed a little different compared to the comic book version. Justin appears to be younger than Tony Stark instead of being older, he whines when he doesn't get his way and appears to be less intelligent.

Justin Hammer is one of Stark's rivals. He owns Hammer Tech; a company that makes weapons. Justin has been trying to create an excate replica of the Iron Man armor but in the process injured just about everyone who tries the suit. After he witness Iron Man fight Whiplash, he was impressed with Whiplash and planned to break him out of prison, while at the same time place a fake Whiplash to take his place so they can perform a fake death. Hammer and Whiplash made a deal with each other that if Ivan made a huge ammount of Iron Man armor, they will put an end to Stark's career. What Hammer didn't know is that Whiplash was planning to turn against Hammer and destroy Stark with the same armor. When SHIELD found out that Justin helped Whiplash escape, they arrested him for helping a prisoner escape.

In this series, Justin Hammer is about as old as Tony Stark. He constructed Adaptoid, an android that can copy abilities of superheroes. He tried to destroy The Avengers by using it but Captain America figured out that, that when Adaptoid copies the abilities of heroes, it copies the weaknesses of the heroes. Justin Hammer tried to get Vibranium from the Savage Land for Red Skull to become a member of his group, the Cabals.

Justin Hammer played a role in "Marvel Action Hour" from the 1990s. He appeared old and had white hair.

Justin Hammer played a major role in the animated series Titanium Man. In this series, he was a "punk" kid who inherited his industry, having a very arrogant personality. He had a run-in with Iron Man and almost completely destroyed him with a war machine. Unfortunately, there were still some modifications to be made with the suit's titanium aspects, and so once setting it on fire it could not be put out. It melted, and so titanium armor was created. Later, Hammer had been blackmailed and began attacking everyone he had suspected to be the blackmailer. This included his own operatives. It turned out to be one of his allies, Mr. Fix, in revenge for not revealing what Iron Man had did to the world. Hammer ran to the suit and revealed his identity as "Titanium Man" to the Heros, attacking them with zombie gas bombs.

Now Iron Man and War Machine were after Hammer in his suit. Iron Man was able to disable the armor and pull out Hammer from inside. Iron Man had him dropped off at his building, where he was betrayed by Mr. Fix and put into a gas chamber. Iron Man tried to save him, but the effects had already taken place, and he became a zombie weakling. He was taken to S.H.I.E.L.D. to see if it could be reversed.

Justin makes no physical appearance, but he plays the role of Justine Hammer's father.

Justin Hammer makes an appearance in the LEGO Marvel Universe as a character, but does not add anything to the plot of the series.

Justin Hammer is an unseen character that is responsible for turning Max Dillon into Electro. 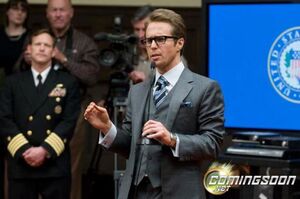 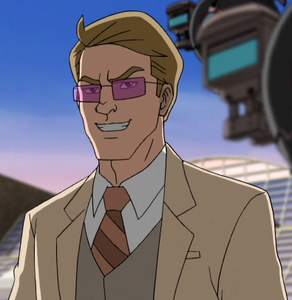 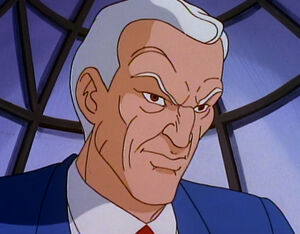 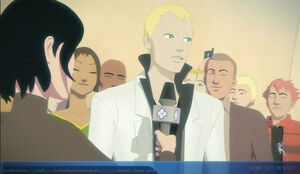 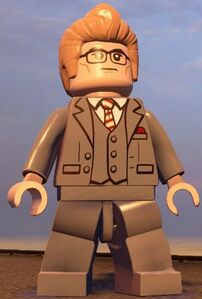