Fanatic
Justin Law is a character in the manga and anime series Soul Eater, and also a teenage Death Scythe who originally served Death before being converted into a follower of Asura. While Justin served as a supporting antagonist in the manga series, he remained a hero in the anime series.

A legend among DWMA students for having become a Death Scythe at the age of thirteen without the aid of a Meister, Justin is assigned to the DWMA's Europe branch. While much of his past is a mystery, Justin has been described as a lonely child who was befriended by Tezca Tlipoca despite being unable to read his fellow Deathscythe's lips. At age seventeen, the other Death Scythes believing he would not be affected by the Kishin's madness, Justin is summoned to the DWMA after Asura's release and is given no instructions on the matter other than living happily with a sense to kill.

Soon after the revival of Arachne Gorgon, Justin comes to the aid of Crona by fending off the witch's aide Giriko before destroying his golem. He then later confronts Giriko again during the battle for Brew. However, Justin was confronted by a Clown, one of Asura's creations, and is consumed by the madness. Now a devout follower of Asura, turned into a sadist, Justin aided Noah by recruiting Giriko, spying on the DWMA. Justin also murdered his former ally Joe Buttaki with Franken Stein taking the blame.

After Noah's demise, Justin resurfaced later during Medusa Gorgon's experiment with the Black Clown she created to be compatible with Crona. Find the creation of the Black Clown as an act of heresy against Asura, Justin fuses with a nearby Clown to deliver "divine punishment" before Tezca intervened. Soon after, his treachery finally revealed, Justin battles a choice group of the DWMA's senior staff while revealing that his religious faith had always been a form of madness and that he would eventually revere the source of it, Asura, as his god. While, overseeing Crona's actions from afar, despite his friend's attempt to reason with him, Justin kills Tezca.

When their enemies close in on the moon where Asura is, Justin and group of Clowns deal with those who are on the moon while the rest of the constructs battle the approaching forces. During the battle, Justin confronts Stein and Marie while question the former's refusal to embrace his madness. The battle ends with Justin's body ripped to shreds, telling Stein in his dying that he will fall into madness as the world order is now no more.

In the anime adaption, Justin's betrayal of the DWMA never occurred. 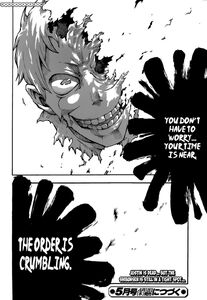 Justin's death
Add a photo to this gallery

Retrieved from "https://villains.fandom.com/wiki/Justin_Law?oldid=3864198"
Community content is available under CC-BY-SA unless otherwise noted.