Villains Wiki
Register
Don't have an account?
Sign In
Advertisement
in: Mature, When They Cry Villains, Umineko Villains,
and 18 more

Higurashi: When They Cry (apparently)

Flirting with and talking to Ange

Juuza Amakusa is an antagonist from the When They Cry series. In Higurashi, he is a Yamainu soldier who is part of the Hibari unit. In Matsuribayashi-hen, he is sent to stop The Club with others members of his unit. Satoko provokes him, and when he tries to chase her in the forest despite warnings from the base and his fellow soldiers, he falls into her trap. While it is unknown what specifically happens to him afterward, he presumably receives the same fate as his fellow members after Okonogi gives the Yamainu the order to surrender themselves to the Banken.

In Umineko, he is a former guard of Eva's and Ange's bodyguard in the 1998 world, hired by Okonogi to watch over her. His guiding principle is of undertaking dangerous jobs for little money and performing with extreme skill. Ange isn't as dissatisfied as she might seem at having him as a person to talk to.

He stands by Ange's side despite being originally hired by Eva, who grew to resent Ange. Due to his talkative nature, Eva fired him before her death.

He is skilled at operating many weapons. The events of Dawn of the Golden Witch suggest his loyalties lie more with Okonogi than with Ange.

Amakusa is voiced by Kōji Yusa in Higurashi (only in the Alchemist game with Matsuribayashi-hen) and Umineko, whom also voiced Shadow the Hedgehog from the Sonic the Hedgehog franchise.

According to EP6 tips, he has been in the Japan Self-Defense Force, the Foreign Legion, and non-government military companies. He was once a part of the French-Foreign League and the JSDF, but for unknown reasons he was exiled from France.

In 1983, he was a member of the Yamainu under the codename 'Hibari 13', as he was part of the 'Hibari' unit. As a member of the Yamainu he comes under Okonogi's direct command and may have been involved in the schemes the Yamainu were. In Matsuribayashi-hen, he was dispatched into the mountains to face-off the Club. There, he encountered Satoko and chased after her. He then stopped at a point where Satoko challenged him to a game to take ten steps toward her. Despite warnings from his fellow members who have already fallen victim to her traps and orders from base to stop, he nonetheless stubbornly accepted her challenge, mainly due to the fact that he was being provoked and made fun of by the child much to his annoyance. When it finally seemed that he was going to win Satoko's challenge, he ended up losing and as a result fell to her trap. What happened to him afterwards is unknown, but he may have received the same fate as his fellow members after Okonogi gave the Yamainu the order to surrender themselves to the Banken.

After some years have passed, he was hired by Eva Ushiromiya to be her bodyguard. At one point, he worked as Ange's bodyguard, but after repeatedly breaking Eva's strict order not to talk to her as well as flirting with her, he became disliked in the end and was fired. After some time, he was training military recruits at Blackwater before he was employed by Okonogi for a large sum of money to protect Ange in 1998.

Juuza Amakusa is a tall and muscular man. He has long white hair tied in a ponytail. He wears black clothing, boots, a chain connecting the lapels of his jacket, and a black hat. He also wears a golden cross on his jacket. He has gray eyes and has a pale skin complexion. He can be classified as a bishounen.

In the manga adaptation of Higurashi: When They Cry, he wears the standard Yamainu uniform, which consists of gray clothes, gray cap and black boots. He also carries a backpack that has his tools. It also seems that his white striped long sleeved collar shirt has been with him for a long time, since he is seen wearing it under his Yamainu uniform. It is interesting to note that he prefers to wear his cap to the side.  He also seems to have a similar build to Battler in 1983.

In Umineko, he wears a somewhat similar, but different outfit. Due to appearing as an adult (or young adult) by the time of Higurashi: When They Cry (which takes place in 1983), he is actually much older than how he looks in 1998. However, he is noted to be still quite young.

Amakusa is a hot-blooded and open young man who cannot stand boredom. He is a laid-back, womanizing man with the outrageous ability to understand guns and other technology. Though, he has a greedy side for money, and throughout his life at different military camps/armies he has had a record of absences for no important reason. He is also quite talkative which resulted in him being fired by Eva.

More about his personality is revealed in Matsuribayashi-hen. He is depicted as being short-tempered when he was provoked and insulted by Satoko. He also seemed to have a lot of pride. He can also be quite stubborn as he refused to follow orders from base when he was challenged by Satoko to take five steps to catch her, as it would mean losing to her, giving the impression that he hates losing.

Alliance of the Golden Witch 1998

When Ange is escaping from Kasumi, she is caught by a guard, and the guard holding her is quickly knocked out (or killed). It turns out to be Amakusa. Ange recognizes him as a bodyguard for Eva when she was a kid. He was the youngest of the family's bodyguards, mainly because of his skill with technology, quick thinking, and other talented skills. He had flirted with Ange as a kid, and was fired quickly afterwards. He repeatedly helps Ange escape from Kasumi and helps her on her journey to Rokkenjima.

Dawn of the Golden Witch Meta-World

At first, Amakusa was seen in the author Toya Hachijo's house, with Ange. He woke her up by tracing his finger around Ange's face in an odd and perverted matter. Ange, infuriated and annoyed, wakes up and Amakusa reminds her of the meeting she has with Toya Hachijo. Toya talks to both of them, and Amakusa is shocked at first, saying that he had seen her as a man at some major book signings. Toya finds that amusing and explains that the man was merely a poser for her publicity. Though, he disappears when Toya reveals that she is Featherine Augustus Aurora.

Throughout EP6, he serves little purpose, and mainly talks to Ange. However, it implied that his loyalties belong to Okonogi rather than Ange and he has been ordered to assassinate Ange after eliminating Kasumi Sumadera and her followers on Rokkenjima.

Amakusa is featured in Umineko no Naku Koro ni Tsubasa in The Seven Sisters' Valentine short story. The Seven Stakes of Purgatory are given the task to find a valentine for Valentine's Day, and give them Ronove's baked chocolates. Asmodeus, the youngest, goes and picks Amakusa as her valentine.

His first chronological appearance would be in Higurashi no Naku Koro ni: Matsuribayashi-hen and is a generic Yamainu member with the codename 'Hibari 13'. In the manga adaptation, it has been officially made that Hibari 13 and Juuza Amakusa are indeed the same person.

As having traveled between the Japan Self-Defense Force, the Foreign Legion, and non-government military companies, he is skilled in counter-sniping and VIP escorting. According to EP6 TIPS, he is extremely skilled in undertaking dangerous jobs. 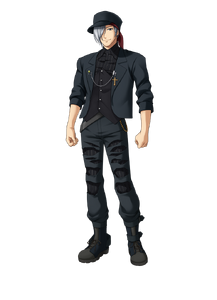 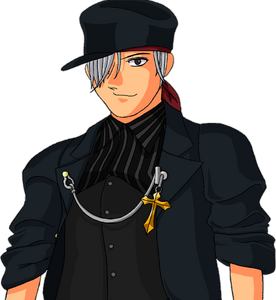