Fishing in his coy pond.
Selling Guardian robots to each of the three regions of Japan.

Reverse engineer the Pandora Box's power source to create weapons more powerful than Nuclear Bombs and sell them to foreign nations.
Complete the Pandora Tower to obtain ultimate wealth and power.
Create an "immortal Namba Empire" to dominate the world.

Juzaburo Namba is the CEO of Namba Heavy Industries and a major antagonist of Kamen Rider Build. He is a wealthy businessman and the one behind Faust, having funded the organization's human experiments and operated it as a covert research wing of his company. He seeks to start a war between the three divided regions of Japan as part of a plan to seize the Pandora's Box for his own ends.

As the Japanese Civil War breaks out, Namba aligns himself with Seito and supplies them with his company's more advanced products to given them an advantage over the other regions. He later assassinates and assumes the identity of Seito's Prime Minister, Masakuni Mido, after Mido refuses to follow his suggestions. Initially seeking only to profit from the Japanese Civil War, Namba eventually begins seeking to use the energy of Pandora's Box to unify all of Japan under one state controlled by him and eventually the world.

He was portrayed by Akira Hamada, who previously played Mr. Titan in Kamen Rider Stronger.

At some point prior to the Skywall incident, Namba took in a group of orphans and conditioned them to be completely loyal to him to the point of fanaticism. Dubbed the Namba Children, these orphans were trained to serve as spies, soldiers and employees of his company and were inserted in various high profile position. In case their position was compromised, Namba had them conditioned to commit suicide if they were ever caught.

Juzaburo met with Gentoku Himuro in a bathhouse to see if Prime Minister Himuro of Touto was interested in the Rider System's manufacturing plans. Gentoku informed Namba him that the Prime Minister Himuro remained uninterested in the weapon. Namba then reminded Gentoku that his company had invested a lot of money in Faust and that the Rider System's power would allow Touto to rise as a global military power structure with, threatening to reveal the Rider System plans to Hokuto and Seito if a deal was not reached.

After Blood Stalk stole the Pandora Box and delivered it to him, Namba informed him that he intended to reverse engineer the Box's power source to put his company in the lead in weapons manufacturing. However, the two then discovered that the Fullbottles Stalk had stolen were fakes, saved for the Octopus and Light Fullbottles.

Namba later backed Seito and its Prime Minister Masakuni Mido, planning for them to inherit Japan. With the majority of Hokuto's forces attacking Touto, Seito launched a succesful of Hokuto before declaring war on Touto once Hoktuo was conquered by Seito.

After Kamen Rider Rogue was defeated by Kamen Rider Build, Masakuni decided to honor the outcome the battle and have Seito turn over the Fullbottles and Pandora Box. Hearing of this, Namba had Blood Stalk kill Mido and transfer his face onto him so he could replace the Prime Minister and wage war against Touto with the full might of Namba Heavy Industries.

When Kamen Rider Evol used the Pandora Box to create the Pandora Tower, Juzaburo watched on horrified and sent Nariaki Utsumi to go stop him, but Evol simply shot away his subordinate.

Following this, Evol claimed to Namba that he created the Pandora Tower as a monument to Namba Heavy Industries' power. Though unnerved, Namba accepted Evol's explanation. He later gave a speech to the citizens of Touto as they were being invaded by Seito's forces, declaring that all of Japan would be soon reunified and that they would become a world superpower once reunited under one state.

After Evolt possessed Sento's body, he confessed to Namba and Utsumi his true origins as the being that annihilated all life on Mars, though stated that he only intended to gain back his original power. Still suspicious, Namba sent the Washio brothers to keep an eye on Evolt when he went to retrieve the Pandora Box from Ryuga Banjou and Kazumi Sawatari.

After assuming his final form, Evolt takes the form of a copy of Soichi Isurugi and returns to Namba. He declares to the war profiteer that he will be the new leader of Seito, though offers to allow Namba to keep his spot as Prime Minister. Namba refuses, so Evolt gives Namba a day to think it over. Not wanting to give up his power, Namba sends Nariaki Utsumi, the Washio brothers and a squad of Hard Guardians to go kill him, declaring to Evolt via tablet that "this is his answer". Not fazed by Namba's refusal, Evolt teleports everyone to a barren battlefield, assumes his Black Hole form and kills all of Namba's forces, save for Utsumi.

After fighting off the Kamen Riders when they arrive, Evolt opens up a portal to Namba's office and travels through to confront him. Pleading for his life to be spared, Namba offers up his company to Evolt if he lets him live. Amused by Namba's cowardice, Evolt states he loves how disgusting humans are and gives Namba a hug. Given a false sense of security, Namba lowers his guard, only for Evolt to kill him by disintegrating his body.

Sawa Takigawa later received a call identified as coming from Namba during the Kamen Riders' confrontation with Evolt. It turned out the call was from Nariaki Utsumi, who was using Namba's number to contact Sawa, a fellow Namba Child.

After Sento defeated Evolt and rebuilt the world, Juzaburo was revived off-screen and is still working at a foundation of the same name, which is currently the iron factory.

While keeping up a good reputation in public as a friendly arms manufacturer and the supplier of the Guardian robots to each of the three nations, Juzaburo is really a power-hungry war profiteer whose only goal is to create an immortal Namba Empire with which to dominate the world. To this end Namba was willing to take orphaned children and indoctrinate them to be completely loyal to him before arranging for them to assume prominent positions in society. He also collaborates with Faust to instigate a war between the three nations of Japan to see which is worthy of unifying Japan. Though mainly profit desiring to profit off of conflict, Namba also seems to hold nationalistic views and has expressed desires to transform Japan into a global superpower. 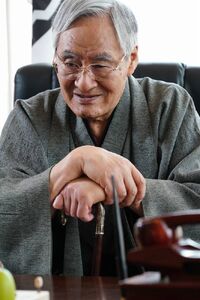 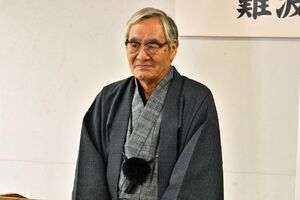 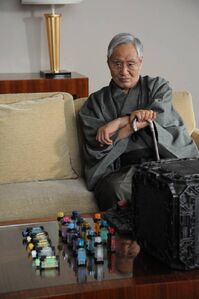 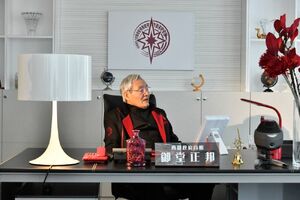 Namba as Prime Minister of Seito. 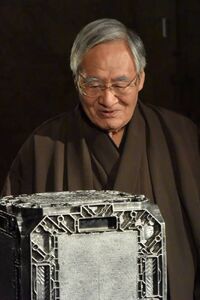 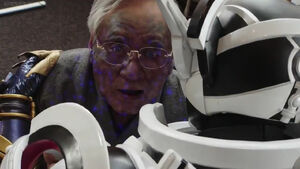 Retrieved from "https://villains.fandom.com/wiki/Juzaburo_Namba?oldid=4156707"
Community content is available under CC-BY-SA unless otherwise noted.