Find and posses the Divine Flower that will control Tak Nohoch (succeeded).

Take control of Tak Nohoch and seize every single city of Mesoamerica (failed).

He is an Olmec leader of his own pre-Hispanic settlement, very known for his mysterious but tough personality and his leadership skills. But in reality, K'as is a cruel, megalomaniacal and expansionist tyrant who wants complete control over all the Olmec cities using sorcery and black magic, as well as the help of dark spirits and monsters created by him, such as Tak Nohoch and Canankol . He is also the father of the co-protagonist Tanké.

He was voiced by the late Pedro Armendáriz Jr..

Little is known about K'as past, just that he is the leader and ceremonial preacher of Kuchil, a fictional Olmec settlement in were La Venta Museum is nowadays, in Villahermosa, Tabasco.

He is a master warlock and sorcerer who secretly plans to take control over every single city in Mesoamerica using black magic.

One day, to achieve this plan he creates a dire creature called Tak Nohoch, a monster made purely of a swarm of vicious, carnivorous locust-butterfly like bugs, destroying some kind of 'animal's trees'. However, the monster was so powerful that it gain control of himself and revealed toward K'as, eating half of his face, leaving him with his bare skull. K'as spend all of his life running away of his own creation afterwards, while it destroyed everything it had in front. However, in all of his deeds, he learned an ancient legend about a princess with a mark on his forehead that will use a Divine Flower to control the wrath of the gods. K'as related this wrath to Tak Nohoch and spent on a quest to find the flower, quest that he failed. Despite his failure, K'as waited years for the girl that will get the flower and stop his creation, so he can steal it and control it for himself

Events in the movie

K'as is first seen in a royal carriage to the ancient ball game to watch his son play in the fictional city of Yokan. Paal introduces him to Nikté as the dreadful Mr. K'as as they were spying him and his son Tanké in some bushes. However, K'as notices them and gazes back to Nikté.

Later, in the game, K'as is sitting in the royal steps watching his son play, and his most loyal confident, an alien-like monster named Canankol notices him that the chosen one princess is already on the loose, as Canankol was watching Nikté secretly. K'as talks back to him to watch more over her, and make sure that she finds the flower.

After the game ended and Nikté goes in a quest to find the Divine Flower, K'as is in his pyramid in Kuchil summoning the Hang Goddess, X'tabay, a feminine evil spirit that leads the suicidal to a personal paradise. He summons her to help him in corrupting Nikté so she will give him the Divine Flower. Xtabay accepts, but in exchange of his son's soul, Tanké, which he accepts. K'as orders Canankol to take Tanké to find Nikté, but this was just an excuse that he used to made Tanké busy so, at the end, K'as can give his soul to Xtabay.

However, Xtabay ends up betraying K'as because she was more interested in Nikté and the prophecy, so he mades a change of plans and sends Tanké and Canankol in an actual quest to find Nikté. When they find her and the flower, Tanké gives it to his father and, excited of finally having it, he tells his son his true plans and orders Canankol to sacrifice him to Xtabay.When Canankol was waiting for her to come to a pyramid in Kuchil, Xtabay frees Tanké and presumably kills Canankol, throwing him of the pyramid, as Tanké's destiny was to be aside Nikté.

When Tak Nohoch finally reaches Yokan, K'as appears in front of their desperate leaders, Kan and Kun, telling them to make him their supreme lord because he was the only one that could stop Tak Nohoch. However, K'as did not knew that the flower was not a physical object, but Nikté herself.

Confident of himself, K'as speaks to his creation one more time and turns back, not realizing that it was not obeying him. K'as laughs as Tak Nohoch swallows him in a swarm of butterflies, killing him and leaving his jade mask in the floor.

K'as is an overconfident, megalomaniacal and power-hungry warlock who will sacrifice everything that he has to get what he wants, including his own blood. He was so obsessed in power that he lost all of his humanity, not caring for anyone except himself, and only using other people for his own purposes.

Despite his high ego, K'as knows when someone is more powerful than him and shows high respect, such as he did with Xtabay. He does not show interest in genocide or murdering at all, only doing it when he will get something worthy in exchange, making him also greedy. K'as can also show fear and know when he is in great danger. In fact, he could have turned in a desperate man if he did not knew the prophecy that can control the damned creature that he made. 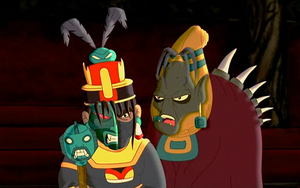 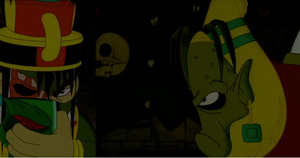 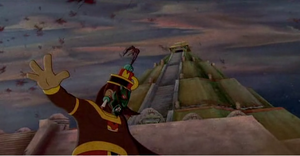 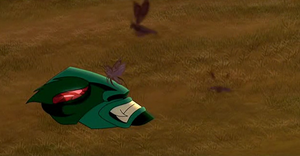 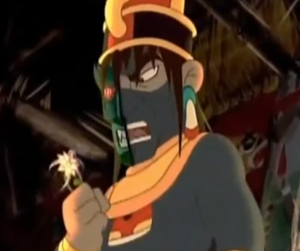 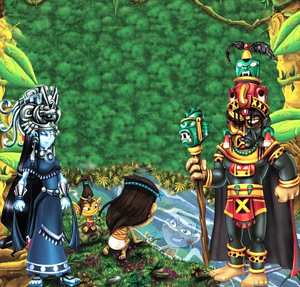 K'as and other characters artwork.
Add a photo to this gallery