Helping Marvin with his evil plans to destroy Earth

Help his owner, Marvin the Martian blow up Earth (failed)

Extraterressial Pet
K-9 is Marvin the Martian's pet alien dog and a recurring antagonist in the Looney Tunes franchise.

In the episode, Haredevil Hare, he was voiced the late Mel Blanc.

When Marvin the Martian appears as the main antagonist of some Looney Tunes episodes, K-9 is the secondary antagonist.

In the 2011 Looney Tunes TV series, The Looney Tunes Show, K-9 appears as a minor character in the series. He does not appear in episodes, he only appears in songs in a few episode such as I'm a Martian, Laser Beam and Christmas Rules.

K-9 is a lime green martian dog with a red nose, green ears, and black eyes.

Just like his owner, Marvin, K-9 wears a green martian helmet, a green skirt and white and red shoes.

In K-9's first appearance, Haredevil Hare, he seems to be unintelligent and gullible. He often snorts while he laughs. In K-9 Kaddy, K-9 was shown to be ticklish when two alien gophers tickle his belly and chin with feathers.

K-9 with his owner, Marvin the Martian 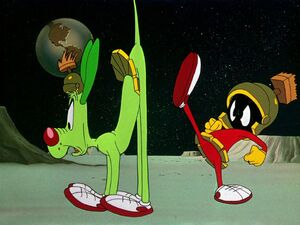 Marvin abusing K-9 by kicking him. 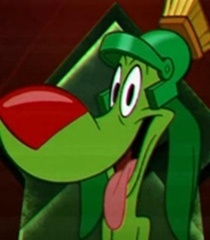 K-9 in The Looney Tunes Show. 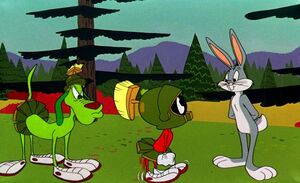