He was voiced by Ryūzaburō Ōtomo in the Japanese version, and Michael Scott Ryan in the English dubbed version.

100 years prior to the series start, KAIN went on a rampage, proving to be an unstoppable force. The combination of the Galaxy Police and an unnamed Juraian ruler used their resources to finally capture KAIN, locking him away in a subspace prison.

100 years later, KAIN finally broke free of his prison and his first act was to ravage Galaxy Police HQ before racing past the Yagami, the ship used by Galaxy Police officers Mihoshi Kuramitsu and Kiyone Makibi, and headed for Earth. Traveling back in time, he slew the weakest link of the Juraian royal family - the Earthborn Achika Masaki. In the present, her son, Tenchi, was nearly erased from the time before the mad scientist Washu stepped in and rescued him. Learning something happened in 1976 that killed Achika, Washu sent Tenchi, Mihoshi, Kiyone, Princesses Ayeka and Sasami and the space pirate Ryoko back to that time period to rescue Achika.

When there were no real leads as to who was responsible, it was the encounter with a survivor of the destruction of Galaxy Police HQ that lead to the discovery of KAIN, but also of a plan to finally capture him when the day he arrived was discovered. When KAIN made his move at Tokyo Tower, the Operative made his move, but proved useless, being dismembered by KAIN.

Tenchi stepped into battle KAIN, but only proved a distraction before Washu set the plan in motion, using the spiritual power of four adjutant shrines to mimic the same snare and trap him in subspace once more. It worked, but KAIN was able to snatch Achika as well as a young Nobuyuki Masaki and drag them in.

In the alternate dimension, KAIN toyed with both teens, taking great pleasure in this. However, this proved to be his undoing as Nobuyuki's devotion to Achika, lead to her finally standing up to the beast and unlocking her true potential, also allowing Tenchi, Ryoko, and Ayeka to make a daring rescue.

Furiously, KAIN took up a new, draconian form and overpowered everyone. However, Achika fought back, taking Tenchiken and transforming it into a naginata, cleaving the beast. KAIN's last desperate attempt at victory was to try to hold Achika as Kiyone fired the Dimensional Cannon to obliterate KAIN and the subspace dimension he was in, proving futile. 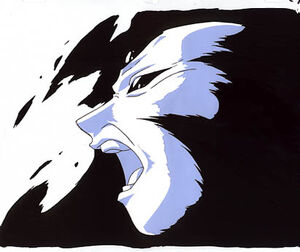 Kain on a rampage. 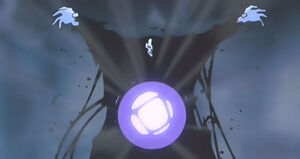 Kain's Breakdown.
Add a photo to this gallery

Retrieved from "https://villains.fandom.com/wiki/KAIN?oldid=3705004"
Community content is available under CC-BY-SA unless otherwise noted.